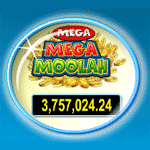 This win followed the win of exactly one week earlier at the Fortune Lounge Group’s Royal Vegas online casino, when player Joelle C. played the Cash Splash 5-Reel Slot Game to take a big €30,801 (just under $40,000). Royal Vegas seems to be quite generous this month, as they also saw player Jean-Pierre M. take the Arctic Fortune slot – a standard game with no progressive jackpot, mind you – for over $40,000 within a single 48-hour span.

Microgaming casinos are of course no stranger to big wins, as the company recently announced that it had passed the $280 million mark in progressive jackpot payouts since introducing its very first online jackpot slot, namely Treasure Nile. The company’s Mega Moolah last year broke its own all-time record single largest online progressive jackpot payout when a player cashed in for €6.3 million thanks to the game. The Mega Moolah jackpot currently stands at €3.7 million. Dave from Lancashire has always been fond of online gambling sites in the UK, but this week his love grew even stronger. Dave just won a £121,691 progressive jackpot prize, and he couldn’t be happier. He was playing on a slot called Pharaoh’s Treasure, an ancient Egyptian themed game that is proving very popular among players.

Pharaoh’s Treasure is anything but cursed. In fact, this progressive jackpot slot has already been won twice this year, each time dishing out more than £100,000 to the lucky winner.

“I was in shock when I won,” said Dave, “it didn’t really sink in for a while. It was an absolutely great feeling.”

“I feel great about the win, you read about big wins but never believe it will happen to you!”

Dave plans to use a big chunk of the jackpot money to pay off his mortgage and clear a few other debts he has, and then wants to go on a nice holiday. With the summer weather heating up, Dave won at just the right time of the year.

Pharaoh’s Treasure is just one of dozens of progressive jackpot slots available online. While these £100,000+ payouts are impressive, they pale in comparison to some of the larger progressive jackpots. For example, a Microgaming jackpot game called Mega Moolah is now sitting at £3.5 million, and could be won by anyone at any time! These games tend to cost more to play than regular internet slots, but the payoff potential is so huge that it’s usually worth it. 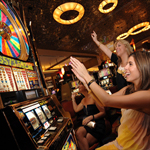 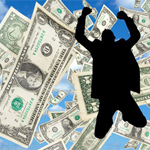 One of this week’s top gambling news stories is about a Joan Ginther, a 63 year old Texan who is a very, very lucky woman. Just a few days ago, she spent $50 on a scratch card lottery ticket, and ended up winning a very impressive $10 million jackpot. She was happy, but she might not have been very surprised.

While most lottery players would be grateful to win such a large jackpot, for Ms Ginther, it is becoming a regular occurrence. This recent win is in fact the fourth seven-figure lottery jackpot she has won in the last 20 years.

Her first big win came back in 1993 when she won $5.4 million. After a long break, she won again in 2006, turning a $30 scratchie ticket into $3 million. Two year later, in 2008, Ms Ginther won for the third time, taking another $3 million from a lottery scratch ticket. Her latest win pushes her total lottery jackpot winnings to a massive $20.4 million.

Ms Ginther has not given any interviews, and is shunning the worldwide publicity that her luck has brought her. It is not known how she intends to spend the largest lottery jackpot she has won so far.

Lotteries are popular all around the world, but their prizes are usually limited to a particular state or a particular country. An alternative global jackpot system can be found online. They are called progressive jackpot games, and they can be played at most online casinos.

Progressive jackpots games, like major lotteries, are capable of paying out in the millions. These jackpots grow bigger as more players enjoy the games, since a small portion of each player’s wager is added to the prize. These progressive jackpots are tough to win, but the payouts can be life-changing.