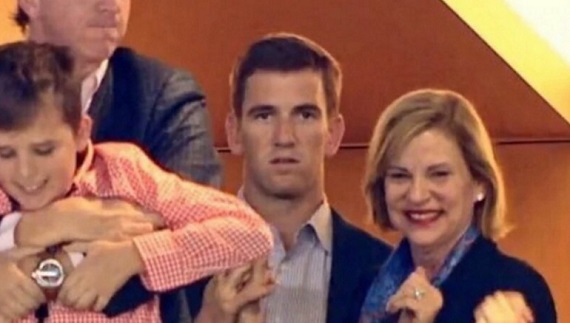 This guy’s face is hilarious

The Eli Manning reaction, or seemingly lack of reaction was the main topic amongst NFL fans on the internet after Super Bowl 50.

The Denver broncos just extended their lead to 20–10 through C. J. Anderson’s six-point run, when the Manning family and the Eli Manning reaction was filmed. At first blink, it seems that everyone was jumping and celebrating, since the Broncos were very close to win Super Bowl 50.

Everyone was celebrating but Eli Manning, Peyton’s younger brother, a two-time Super Bowl MVP quarterback for the New York Giants. Haters, critiques and trolls started to argue at once that he was jealous of his brother’s success, who was about to match his family record of two Super Bowl titles. But keen fans of sports scores naturally had other ideas.

The Eli Manning reaction wasn’t about that at all. If you look closely, you can see that on the left, their father, Archie Manning, the former QB of the New Orleans Saints is similarly blank-faced. Even their older brother, Cooper, a former NCAA wide receiver, is tight-lipped as he jumps up from his space.

The Eli Manning reaction was about concern

First, from the movement of their eyes, you can see that they were checking the officials, to make sure that Anderson’s run was actually a touchdown. Second, I am positive that they were already thinking about the next play-call for the two-point conversion. Third, they were surely checking the time left on the clock for the Carolina Panthers who were trying to make a comeback.

This is how an NFL quarterback, or an expert of gambling facts watches the game. Especially if they are involved through family. The Eli Manning reaction was about concern. He was concerned, since he knows that the game wasn’t over at that point. He knows this better than anyone, since, as Martin Rodgers pointed out: Eli lost 6 of 10 games in the 2015 NFL season with the NEw York Giants after leading or tied with less than two minutes remaining in the 4th quarter.

Eli was just concerned for his brother, as anyone would have been in that situation.