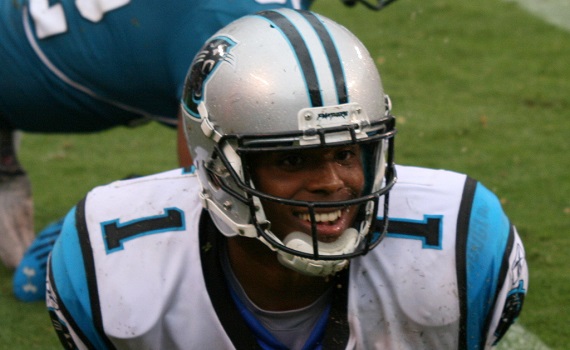 Cam Newton always smiles, even if he is on the ground (Photo: Flickr.com)

The Charlotte franchise is on its way to the first ever Super Bowl victory in club history as the Panthers to win Super Bowl 50 seems to be the default scenario after the NFL Conference Finals.

Cam Newton can be the first quarterback to win the Heisman Trophy, National Championship, NFL MVP and the Super Bowl, according to sports scores news. So many great quarterbacks have played the game over the years, but none of them were able to assemble this kind of collection. Not even Peyton Manning, arguably the greatest quarterback, whom Newton will face in the final in Santa Clara next Sunday.

NFL.com: There’s no stopping the No. 1s

That is the third season in a row that No. 1 seeds from both conferences made it into the final. Manning experienced this setup both in the playoffs of the 2009 and the 2013 NFL seasons, when he reached the playoff with the Indianapolis Colts and the Denver Broncos. However, his teams were defeated by the New Orleans Saints and the Seattle Seahawks respectively.

After watching Sunday’s conference finals, the Panthers to win Super Bowl 50 is the obvious bet for most fans and experts of gambling facts. And that would be the first championship in the history of the franchise based in Charlotte, North Carolina. The Panthers were established as an expansion team in 1995, the 29th franchise of the NFL. They have played only one world championship final so far, Super Bowl XXXVIII after the 2003 NFL season. Back then they faced the New England Patriots but lost 32–29 in Houston. Yes, that was the ‘Nipplegate’ Bowl, when Justin Timberlake was somehow able to rip Janet Jackson’s dress apart during the halftime show…

Well, it’s a positive for Carolina that they were able to avoid the New England Patriots and that also could boost the odds for the Panthers to win Super Bowl 50. Alright, maybe Ron Rivera would have favored to face the one-dimensional offense of the Patriots in the final, but it’s not bad for opponents to know that the Tom Brady-Bill Belichick duo is out of the competition.

Another classic between Brady and Manning and this is how Twitter reacted… https://t.co/4UrogYS7LS #NFL pic.twitter.com/ycv5dXfkKV — Ladbrokes (@Ladbrokes) January 25, 2016

This leaves them with Peyton Manning and Gary Kubiak. And more importantly, the defense that is led by Von Miller and DeMarcus Ware on the field and Wade Phillips on the sidelines. This unit could be able to handle Cam Newton and the Carolina offense, which suggests that a very exciting Super Bowl is ahead of us.

However, Carolina also have an elite defense, and that might cause some problems for Peyton Manning. He also struggled against the Patriots in the second half, putting only three points on the board after half time. If he won’t raise his game significantly, he won’t be able to avoid the Panthers to win Super Bowl 50. This would leave him with a 1–3 record in Super Bowl finals with only one bullet left. Or no more bullet at all?

Cam Newton finds out the Panthers are playing the Broncos, calls Peyton Manning “The Sheriff” https://t.co/0dS4sr6Uod

Well this might be the very last time we could see Peyton Manning, probably the best quarterback ever, playing professional football. Even if he will not avert the Panthers to win Super Bowl 50, that will be a special final. Not just because it will be a great anniversary. But because this might be the Sherriff’s last duel.

Would he end up still standing after the smoke has gone? This is to be found out. According to keen followers of gambling news, the Panthers to win Super Bowl 50 is the line to bet on. But in this game, and in this very very special final, everything can happen…