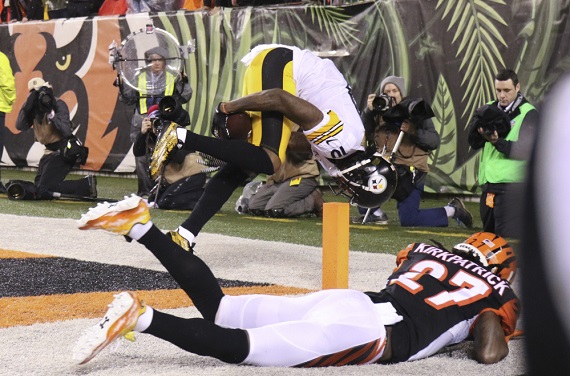 The 2015 NFL Wild Card Round brought some unforgettable moments for sports fans all around the world.

The 2015 NFL Wild Card Round started with Kansas City’s road victory over ACF South champions Houston Texans. The outcome did not surprise experts of gambling facts, but the 30–0 result was harsh. The Chiefs won a playoff game after 22 years. We have also seen a defensive end lining up in the quarterback position, ca. the first time ever in league history.

The trick play didn’t work out for J.J. Watt (and Vince Vilfork on his right hand), but it was cool at least. This was the first in a row of four road wins, a feature that never happened in NFL playoffs history before.

NFL.com: Four road wins in the 2015 NFL Wild Card Round

On Saturday night we experienced an extremely tight, tense and very long rivalry game between the Cincinnati Bengals and the Pittsburgh Steelers. That was the craziest of the 2015 NFL Wild Card Round. The hosts have almost won it, thanks to Ben Roethlisberger’s injury, but they were able to blow the game away in the end. Unnecessary penalties were called on Vontaze Burfict and Adam ‘Used to be Pacman’ Jones in the last minute, bringing the Steelers 30 yard closer to the Cincinnati end zone and costing their team the victory. Jones went crazy after the game, insulting the referees on his Instagram account.

It was easy for Chris Boswell to kick the game winning field goal from that position and to set up a Pittsburgh at Denver matchup for the Divisional Round. The highlight of the game and maybe the whole 2015 NFL Wild Card Round was Martavis ‘Alien’ Bryant’s crazy catch. The play that dominated sports scores news all over the world was one of the most spectacular wide receiver moves in the history of the NFL.

There were also some controversial calls from the officials, but had Burfict and Jones acting more like adults, Cincinnati would be preparing for a Divisional game against the Patriots at the moment. Instead, they are already into offseason. The last time when Cincinnati have won a playoff game was 25 years ago.

On Sunday, the Seattle Seahawks played another extremely close game vs the Minnesota Vikings. With -6 °F (-21 °C) at kick off, this was officially the third coldest game in league history. The hosts missed Marshawn Lynch, who wasn’t able to come back after his injury and it looked like the hosts can handle the rolling Seattle Seahawks. However, a miracle play from Russell Wilson changed everything.

Only Russell Wilson could take a botched snap and sure-fire 20-yard loss.. And turn it into a 35-yard pass. WOW. https://t.co/Xqlty0CGqp

The hosts would have been still able to win the game, but their kicker, Blair Walshed missed the would-be game winning field goal from close range. Though the hold was bad, he took full responsibility for the mistake.

Sunday’s action was wrapped up by the Green Bay Packer’s victory at the Washington Redskins. That was nothing special, just Aaron Rodgers and his offense playing the way they used to do. The defense did also well against Kirk Cousins, who wasn’t able to deliver his usual home performance. Gambling news also reported that Redskins outcast Robert Griffin III has cleared his locker room after the game.

Kansas City at New England and Green Bay at Arizona will be played on Saturday, while Sunday’s action will feature Seattle at Carolina and Pittsburgh at Denver.