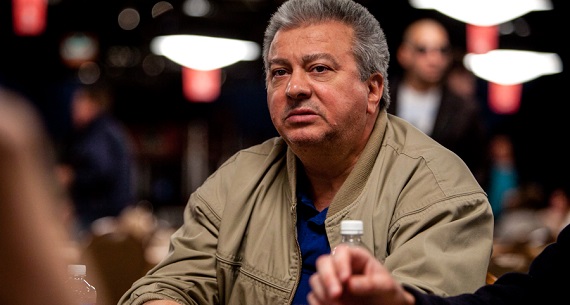 Archie will have to find some other living, and that might be the least of his worries (Jayne Furman)
Archie Karas is the latest name in the Las Vegas black book, as the legendary poker player banned from casinos by the Nevada Gaming Commission.

Karas was at his best in the early nineties. Back then he completed “the Run”, a hot streak when he started with a U$50 bankroll and ended up winning  40 million dollars. This happened between 1992 and 1994, and no pro poker player was able to stop him except Johnny Chan, who robbed him of 900,000 bucks in hold’em poker games.

The Greek blew it all in the next couple of years though and was never able to crawl back to those heights. He had decent poker results, completing shorter winning streaks and money finishes at the World Series of Poker. And he also became known as a serious blackjack player who sometimes crosses the line. And he did that quite too often.

Karas was first arrested in 1988 for cheating in blackjack. He was marking cards in Reno, and he was arrested several other times after that in Nevada. Last time Karas was caught selling his card marking trick in San Diego in 2013. He was always able to evade jail time, but 2014 saw the legendary poker player banned from visiting casinos in California.

And the Nevada Gaming Commission recently opted for that too. They included Karas into the GCB Excluded Person List, making the Greek the 33rd member of the infamous group. From now on, by Nevada gambling laws, he commits a criminal act only by entering a casino in the state.

This means that the sixty-four-year old is unable to participate at future WSOP events that is held in Las Vegas every year. He had seven money finishes in the history of the competition. His best result was a 4th place finish in 2005, when he picked up 30,120 dollars in a Seven Card Razz event. As the NGC had the poker player banned, this result is likely to be his last.