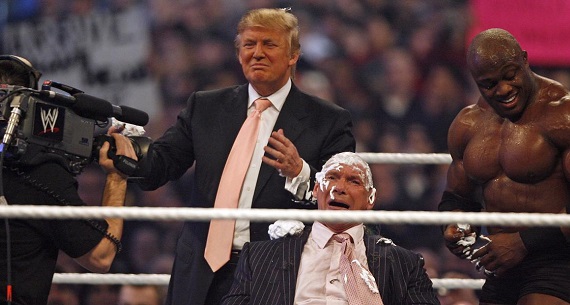 Hail to the Chief? Are you sure? (Photo: Getty Images)

Seriously. The guy, who started as a real estate developer, then got into television, writing books and now running for the presidency, answered a wide list of questions during his Twitter session. He discussed not only political matters, but also answered seemingly not that serious questions. And he did that with amazing seriousness, like when tackling the Cowboys’ chances without the injured Tony Romo.

The future President of the United States has to know everything after all. Or if not everything, at least football. But Trump knows everything, he is aware of the Dallas Cowboys’ problems and the strength of their defence.

Of course, he did not forget to drop that how good he is with Romo and more importantly, Tom Brady. Since the latter superstar is the hero of New England, an area full of blue states, he had to mention that he and Mr. Brady are best buddies, and he also supported the Patriots quarterback during the ridiculous deflategate scandal. Wow, Trump knows everything!

Alright, casino winners know that one area he is not an expert of is probably gambling. Trump brought four businesses to bankruptcy in the ’90s and 2000s: Trump’s Taj Mahal, the Trump Plaza Hotel, the Trump Hotels and the Casino Resorts.

Bet365 Sportsbook has excellent online betting odds for Trump being elected as the next President of the United States. He is available at 8.50 (15/2), being third favourite behind top dog Hillary Clinton, who goes for 2.25 (5/4) and Jeb Bush, whose success is given at 5.00 (4/1) by the top gambling destination.

Experts of gambling facts might be aware of that at some funny online gambling sites you can also wager on celebrities like Eva Longoria, Kanye West or even Kim Kardashian winning the presidential election. That wouldn’t be the first time that show business got into politics. Just think of Ronald Reagan’s career as an actor… or rather don’t.

But Trump knows better how to impersonate a dumb character like George W. Bush did with great success. Trump knows everything, or almost everything, so he could totally do that. The question is that how many of the Americans will take him seriously.