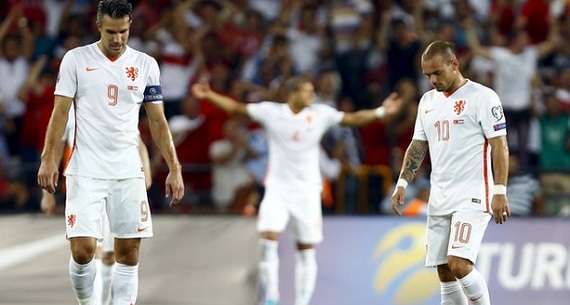 The Netherlands EURO 2016 qualifying campaign has been a disaster so far (Photo: Reuters)

After they suffered a 3-0 defeat in Turkey, Netherlands Euro 2016 chances are under serious threat.

The Dutch national team can still reach the playoffs of the Euro 2016 qualifiers, but they have to come back from a two-point handicap in two games. Now they will have a month of preparation. It is not expected that national team coach Danny Blind would leave his post after he took over the side in the summer. There is a crisis at the Dutch national side, and another change in management is hard to see bringing an instant solution.

Especially as Netherlands Euro 2016 chances are so bad that they don’t even have control over their fate. Next time they will play against Kazakhstan on the 10th October, so players will have time to clear their heads. Gambling news report that they will be 1.22 (2/9) favourites according to Betway Sportsbook in their next qualifier. However, looking at the side now, a draw for 6.00 (5/1) is also very tempting.

BBC: Euro 2016: What has gone wrong with Netherlands?

Several national teams celebrated the qualification for next year’s UEFA European Championships during the weekend. Two sides have booked their places for the tournament in France from Group A. They are Iceland – 67.00 (66/1) outsiders to win the Euro ’16 at Betway Sportsbook – and the Czech Republic, who are 81.00 (80/1) outsiders. Meanwhile the Dutch football giants continue to struggle. 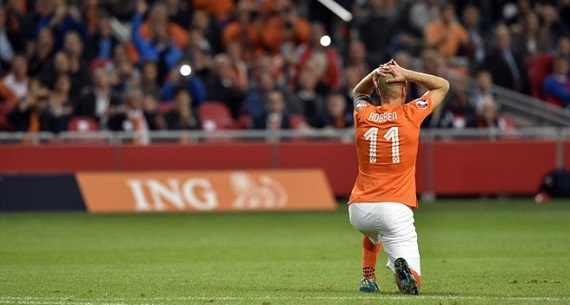 After a defeat in Turkey, Netherlands Euro 2016 chances suffered another blow under national team coach Danny Blind. The loss on Sunday came just three days after another defeat appeared in live sports results against Iceland. There are two rounds left from the qualifiers and the Dutch are trailing Turkey by two points. This means that they only have a chance to reach the playoffs, if the Turkish lose against the Czech Republic or Iceland.

So, Turkey have to play against two sides that already have qualified for the tournament. Moreover, they are boosted by the fact that they inflicted the heaviest defeat on the Dutch since Euro 1996, when England dispatched them 4-1 at Wembley. It is no wonder that Netherlands Euro 2016 chances were cut, but they still have an outside shot to win the Euros with betting odds of 34.00 (33/1) according to Betway Sportsbook.

It seems that the announcement of Danny Blind did not solve problems at the Dutch national team. The side struggled under Guus Hiddink, and they have been struggling under Blind too. Netherlands Euro 2016 chances are becoming weaker and weaker. They occupy fourth place in Group A. This means that they have considerable problems. The blame is on Blind for the Netherlands Euro 2016 failure (Ph: gooischetamtam.nl)

Their qualification is out of their hands. Don’t forget, this is the same side that went all the way to the World Cup semifinals last summer in Brazil. They were eliminated by Lionel Messi’s Argentina on penalties, but after that they swept aside the hosts to claim the bronze medal. Though it is clear that the pragmatic approach left the team together with Louis van Gaal, they are still a puzzle, even for many experts of gambling facts.

Dutch football is all about ball control, skills and attacking approach. These are more important values for them than points and results. Still, the Dutch were able to reach second and third places in the last two World Cups by pragmatic football only. They returned to their traditional way of football since, but after Netherlands Euro 2016 chances will be completely gone, they might try something less pretty again.

It seems that those times, when the Dutch were successful by totally controlling their games are gone. Whether it is temporary or permanent, we will see. But it seems, that they have to embrace a new identity to return to world’s elite on a permanent basis.