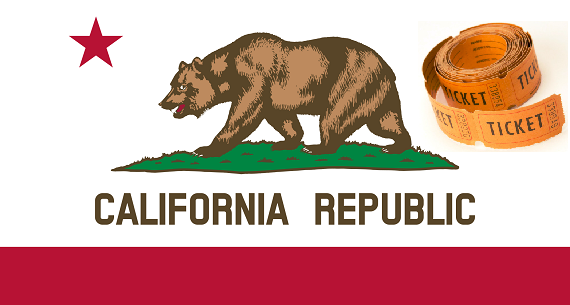 California could join those states that enable high-stakes raffles for the purpose of charity at professional sports events.

A bill that passed the state senate that would let professional sports franchises to organize high-stakes raffles. Those 50-50 games are very popular all around the country, raising considerable amounts of money for charities. Lucky players can feel like casino winners at the same time. Those who participate have a shot at half of the revenues, so it is easy to understand why these games are so exciting. Meanwhile players also know that they have contributed to a good cause. The other half of the money goes for charities. There is also criticism though. The bill currently in effect would still apply all the remaining charity organizations. That makes it really hard to raise money through raffles.

Major sports franchises in California strive for holding high-stakes raffles. According to current state regulations, only 90-10 raffles are legal. This means that players can go only for the 10% of the pot. At least 90% must be given away for charity. The 2001 bill also has that no electronic device can be used for selling raffle tickets or performing the draw.

A new proposal would let professional sports teams to be given an exemption from this law to organize 50-50 raffles. They would be also able to use devices, selling electronically generated tickets and employing a random number generator to determine the winner. Spectators at professional sports games, pro golf tournaments and NASCAR races would be able to participate. The raffle could be held only at the events itself.

This high-stakes raffles system works in almost 30 states in the US and it is in place in Canada as well. The point would be raising considerable amounts for charity through the large pool of sports fans. High-stakes raffles offer a much more tempting prize than the 90-10 raffles. Thus a large number of sports scores fans are expected to participate if the bill passes.

Many nonprofit organizations oppose the bill however. They feel that legislation would favor major sports unfairly. CEO of California Assn. of Nonprofits, Jason Masaoka said, “This bill is a carve-out. It creates special rules for raffles by sports leagues, but the old rules still apply to PTAs and school bands.”

Native American tribes operating casinos think that this would be a new form of gambling. David Quintana, California Tribal Business Alliance lobbyist said, “When you go from a 90-10 split to a 50-50 split, you’re moving away from charity to something more like a lottery. This is a huge change.”

Professional sports teams are lobbying for the possibility of organizing high-stakes raffles at sports events in California. These 50-50 raffles would be held at sports events only. 18 pro sports organizations, 23 minor league teams and golf and racing events are in the mix. Half of the revenues would go for charities. The players would go for the other half of the pot.

The bill already passed the state senate, online gambling news report. A similar law failed last year however. Several nonprofit organizations naturally opposes the new proposal. They argue that making an exemption favoring professional sports franchises would be unfair towards small charity organizations like food banks or churches. Jan Masaoka, CEO of the California Association of Nonprofits was quoted by online mobile news, “Any bill that says there’s an exemption from the law for 11 corporations as named below, that immediately doesn’t smell right.”

The Diamondbacks sold over $100,000 worth of high-stakes raffles at a single game.

Meanwhile high-stakes raffles are great success in many other states. Texas locals will vote in November whether to change state constitution or not in order to enable pro sports teams to organize raffles at their games. In California the bill is supported by franchises like the Los Angeles Dodgers, the San Francisco Giants and the Sacramento Kings. Service groups like the American Legion and Los Angeles Boys and Girls Club also back the proposal.

High-stakes raffles can raise a lot of money quickly. The Arizona Diamondbacks were able to sell a record USD 100,016 worth of raffle tickets in one game, using electronically generated tickets for their 50-50 raffle. They supported charities reacting to the Yarnell fire that killed 19 firefighters. Sen. Isadore Hall, the author of the law expressed that critics should be ashamed of fighting the bill. He argues that money generated by the high-stakes raffles would be vital for poor communities he represents, like Watts and Compton.

Although this is all about charities, there is a lot of money on the table too. Pointstreak Sports Technologies Inc. is an operator providing an electronic raffle system. That system is used by more than 70 pro sports teams all around the United States. Is is understandable why they spent more than 100,000 dollars in the last two years on lobbying to enter the largest market of the states…