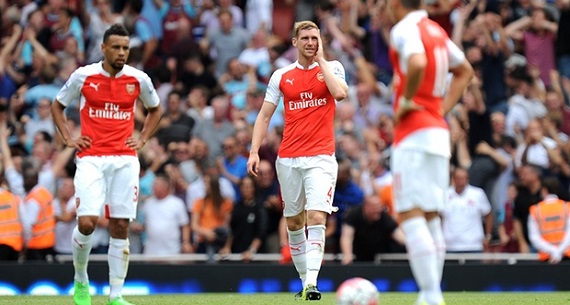 Arsenal players were shocked by how the derby v West Ham was going (Photo: PA)

Arsenal kicked off the season with an uninspiring performance against West Ham on Sunday, that ended in a defeat.

Arsene Wenger brought in Petr Cech from Chelsea in the summer to stop conceding cheap goals. Yet, the experienced Czech international looked like a youth player making his debut at full level at the Arsenal v West Ham derby in the opening round of the 2015-16 Premier League season. Cech made two errors, both of them leading to goals, scored by Cheikhou Kouyate and Mauro Zarate.

But the aspect of the game that could be the most discouraging for Arsenal fans was the Gunners’ overall display. As Arsene Wenger put it after the game, they were unconvincing. Up front and at the back as well. Despite Arsenal players are anything but inexperienced youngsters, they looked like an Arsenal team from an earlier period of Wenger’s reign. Arsenal are 5.5 (9/2) to win the Premier League at Bet365.

Arsenal doomed themselves, Arsene Wenger expressed after Arsenal v West Ham, that ended 0-2. The Gunners’ manager said defensive lapses caused their defeat against their city rivals in the opening round of the 2015-16 Premier League season. He also said that his team’s overall performance was “not convincing”, online mobile news report. The visitors clearly deserved the win in the Arsenal v West Ham derby. The match also saw a poor performance from Petr Cech, who made his Premier League debut for Arsenal on Sunday after a summer switch from Chelsea, after he spent 11 years at Stamford Bridge. He made errors before both goals the Hammers scored. Wenger did not blame the defeat on the 33-year-old Cech international however.

He said, “The way we conceded the goal just before half-time, with the experience that we have in our team – it’s difficult to understand. It was a collective lapse. There are many things to say about that. I knew that if the delivery was good, we would be in trouble, even before the free-kick was taken. The concentration was not completely there on the set piece, the organisation was not perfect. The positional play – we were too far from our goal. We gave him [Kouyaté] too much distance to run into. We killed ourselves.”

Telegraph.co.uk: Arsenal need to sign a world-class striker to win the Premier League – you cannot just go with Olivier Giroud

After a promising spring and an impressive summer transfer window, Arsenal looked like genuine title contenders, according to fans, pundits and experts of gambling facts. Yet they started the season with a defeat, as Arsenal v West Ham ended 0-2 on Sunday. This doesn’t change the Gunners’ status however, but pointed out that Arsene Wenger need to invest in a world class striker to challenge for the title indeed. 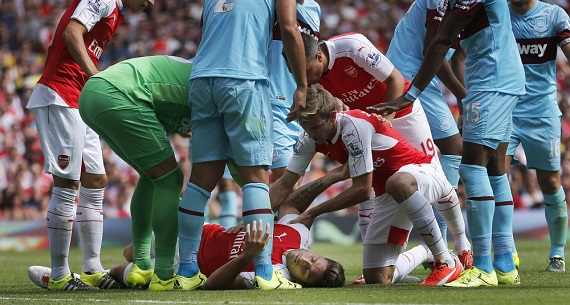 Not only Arsenal got knocked out, but Giroud personally, too (Photo: AP)

Though Petr Cech made two big errors in the Arsenal v West Ham game, he might still be a worthy addition to the squad. However, Arsenal needs a natural striker, as Olivier Giroud is not enough for a successful title run. Arsenal’s other attackers, like Theo Walcott and Alexis Sanchez are versatile forwards, but neither of them is a pure striker.

Update on Olivier Giroud: contrary to some reports, he was not unconscious at any point after collision today and has returned home as usual

Danny Welbeck is more useful in that position, but he seems to be prone to injuries. Giroud might be a better player than the public sees him, but Arsenal need more options up front to win the league. Arsenal and Manchester United, and maybe the other two teams from last year’s top four have the same problem. And maybe all of them are about to complete one big signing each before the transfer market closes.

Arsene Wenger expressed after the Arsenal v West Ham match, where the home team was beaten 2-0, that his team was not convincing regarding attacking and defending. He also mentioned the easy goals, both coming with a very bad timing, at both sides of half time. Wenger said that West Ham looked sharper, and that they are clearly ahead of Arsenal considering preparation. 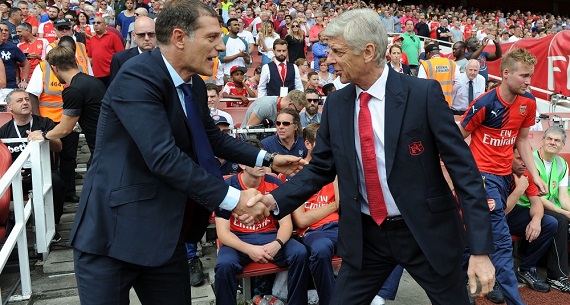 That is hardly a surprise for those, who follow sports scores, since Slaven Bilic’s side completed six competitive matches already this season. Even though the Croatian had to give up the last Europa League qualifier, and with that the competition too, as the Hammers’ squad is anything but equipped for double strain.

Wenger admitted, “I knew before game it would be tricky game on that front. A big part of it was not to concede, even if we played for a 0-0. The way we conceded the goal just before half-time, with experience we have in our team, is difficult to understand.”