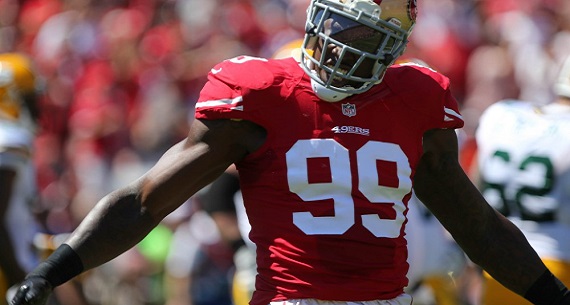 Another arrest for driving under influence saw Aldon Smith released by the San Francisco 49ers. This was the star linebacker’s fifth arrest in three years.

San Francisco 49ers defender Aldon Smith was arrested on Thursday for suspected hit and run and driving under the influence. He was bailed out, but the next day came the news reporting Aldon Smith released by the 49ers. We knew that the San Francisco NFL franchise has some problems. They replaced head coach Jim Harbaugh with Jim Tonsula after last season, and also had a bunch of key players departing or retiring. They are outsiders to win the NFC West with odds of 11.00 (10/1) at Bet365.

But now we also know that Aldon Smith also has serious problems. With a history like his, it will be enormously hard to find a way back to the NFL. He has to fix his life first. But before that, he has to acknowledge that he has a problem and he needs help.

After a troublesome offseason for the San Francisco 49ers came the news about Aldon Smith released by the California NFL franchise. The former Pro Bowl defender was arrested on Friday. He was accused with hit and run, driving under the influence and vandalism, online mobile news report.

From the PIO: SCPD arrested Aldon Smith last night for Hit&Run, DUI, and vandalism. A press release will be provided later this morning.

The 49ers finished the 2014 NFL season with a disappointing 8-8. After that head coach Jim Harbaugh left the franchise and a group of key players also departed or retired. Now it was the star linebacker’s turn, as the headlines “Aldon Smith Released by the San Francisco 49ers” appeared in the media.

Smith had several troubles off the field recently. The NFL suspended him for nine games last year for violating the league’s policy on substance abuse and personal conduct. More than a year ago he had an airport incident, appeared to be claiming that he was carrying a bomb. In 2013 he was arrested for DUI charges, which led to a five-game suspension.

New San Francisco head coach Jim Tomsula commented the move that saw Aldon Smith released from the 49ers organization in a press conference. Star linebacker Smith was arrested on Thursday, gambling news reported. Smith had a meeting with the head coach and general manager Trent Baalke before they made the call. 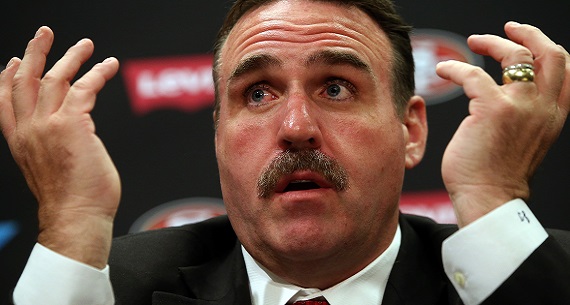 Jim Tomsula: There’s only so much you can do for someone not willing (Photo: Getty Images)

He added, “He won’t have to walk this path alone. “We’re not worried about football. It has nothing to do with football. If one person out there reads this, and you’re struggling, get help. Go get it. You’re worth it. There’s a value in every human being. Get the help. You don’t have to walk alone.”

Tomsula also spoke about the locker room’s reaction to the news reported Smith’s arrest. He said, “It was sadness, that’s what it was, sadness for a guy, a person. We care about that guy. Deeply.”

Sports.Yahoo.com: Will Aldon Smith get another chance in the NFL? It’s unclear right now

The news about Aldon Smith released by San Francisco came hardly a surprise for those who follow NFL gambling facts. Smith registered five of the 49ers’ 12 arrests in the last three years. He also refused to claim responsibility for his troubles. It seems that though he might be an amazingly talented young player, he is unfortunately not capable of pulling his life together. 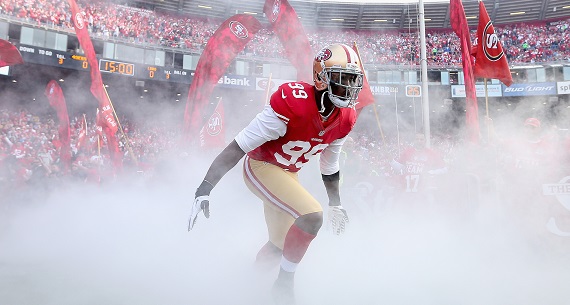 Smith’s career might just disappear into the mist (Getty Images)

He also denied that he made a mistake on Thursday after his latest arrest came. And speaking with the team, he denied that he was responsible for his off the field problems. Maybe this was what got Aldon Smith released by the 49ers. He had had his chances, yet failed to improve his behavior or to ask for help. The franchise did what they had to do.

New 49ers coach Jim Tonsula insisted that he and the organization will be there to help Smith. But first of all, Smith has to acknowledge that he needs help. Without doing that and working for his life to be fixed, there is no way back to the NFL. Aldon Smith released by the 49ers – out of the NFL for good, perhaps.