Can Daniel Sturridge return to his old self? (Photo: fameimages)
Liverpool’s prolific but injury prone striker is about to make the Reds game against Manchester United in September.

This is great news to Brendan Rodgers, and the early Daniel Sturridge return might be a huge boost for Liverpool. They will need every positive impulse, since there is a tough schedule ahead of them in the early weeks of the 2015-16 Premier League season.After the opening match at Stoke, they will entertain Premier League rookie Bournemouth at Anfield. This looks like a piece of cake, but right after this come the away trips to Arsenal and Manchester United with a home game against West Ham and the international break sandwiched between them. Sturridge can be useful for Liverpool after the usual injuries for players while on international duties. Liverpool is 3.75 (11/4) to finish in the top four in the Premier League at Bet365.

LiverpoolEcho.co.uk: Daniel Sturridge to return to Liverpool FC training this month – but can the Reds still bank their star striker?

This summer’s rehabilitation could be vital in Daniel Sturridge’s career. The striker was operated with a hip muscle injury, and spent most of the summer in the United States working to come back as early as possible. The Daniel Sturridge return was scheduled to October originally, but it seems that he can feature in the Reds’ game against Man United in September. 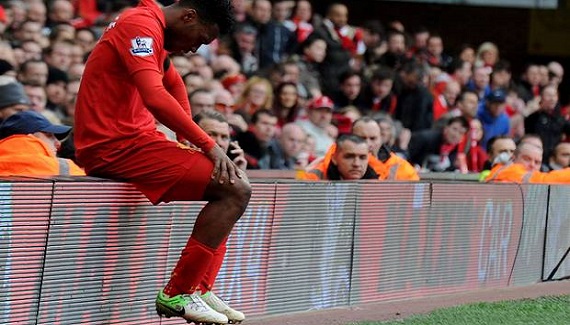 Ankle, hip, thigh injuries, Sturridge had them all (Photo: Independent)

The last 12 months were very tough for the 25-year-old. He had different kind of injuries and hardly could spend some time on the pitch. Still, he is Liverpool’s most prolific goalscorer. However, Brendan Rodgers might have been planning already for a future without him, having him back permanently would be a great boost to the team.

He joined Liverpool in 2013 January, and according to gambling facts, he scored 40 goals in 67 games since, which is a terrific record. And he also fits into Liverpool’s style perfectly. Being a natural goalscorer, who is equally strong physically and technically, he can engage and confuse defenders, providing space and opportunities to his teammates.

Telegraph.co.uk: Liverpool news: Daniel Sturridge return expected to action in September – and it could be against Man Utd

A Daniel Sturridge return is expected at Old Trafford against Manchester United on September 12. He is scheduled to get back to Melwood, the Liverpool training centre before the end of August. The striker was working on his rehabilitation programme during the summer in the United States, after he had a procedure to repair a problem in his hip muscle. 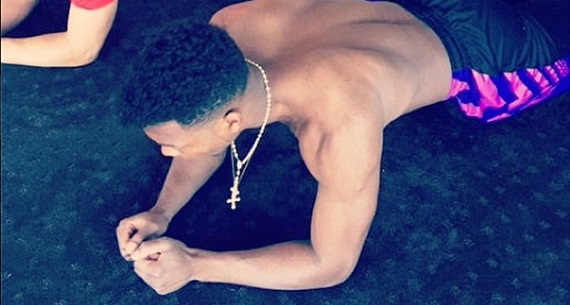 Wearing so much bling to physiotherapy, he’s lucky not to have a broken neck, too (Photo: Independent)

Sturridge had a lot of different injuries during the last few years, as many of those, who follow sports scores might remember. He had to miss a lot of games due to groin and calf problems. According to gambling news, his injuries were triggered by his chronic hip problem. Liverpool owners sent him to the US where a medical team, treating the Boston Red Sox, cured him to prevent further damages.

While he was away, Brendan Rodgers signed the young Belgian hitman, Christian Benteke for GBP 32.5 million. The two of them might form an intriguing partnership in the future, and the former Aston Villa striker could fill in for Sturridge as well, as long as he is not available.

It seems that a Daniel Sturridge return can come earlier than it was expected. He could be available after the international break, so he surely misses England’s two upcoming Euro 2016 qualifiers. The Three Lions will face San Marino on 5 September and Switzerland on 8 September. 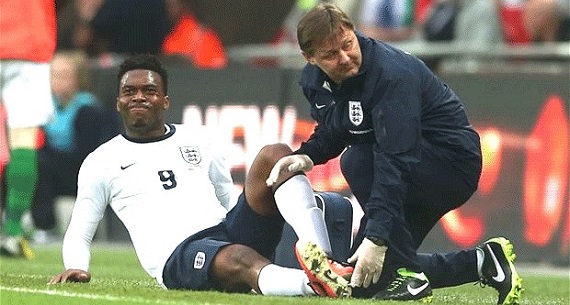 He’s been unlucky at international games, too (Photo: Getty Images)

However, he could be selected for the Reds’ away trip at Manchester United after the Euro qualifiers. Sturridge was able to feature in twelve games only last season. He played as a starter seven times, and still managed to score four goals. He had two thigh injuries and also suffered from a calf problem in last season, as keen followers of live sports results might remember.

After the leg injuries, the 25-year-old player tore a hip muscle while playing against Manchester United at Anfield Road on 22 March. He was selected for two more games, but wasn’t able to make the team since then. He expectedly will join his teammates in August. But can Sturridge return in a form to take revenge on Man United?