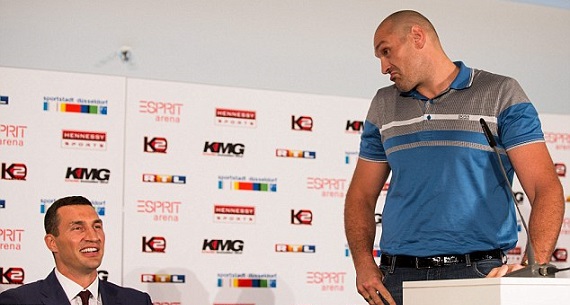 Klitschko was more amused than intimidated (Photo: EPA)
The Tyson Fury v Klitschko title match is still months away, but it has already kicked off at the press conference.

Though Wladimir Klitschko is 1.22 (2/9) favorite against the British-Irish boxer at Bet365, Fury wants to break Klitschko’s face in their respective fight that is scheduled to 24 October. The two will clash in Dusseldorf for the heavyweight titles possessed by the Ukrainian. Klitschko has a 64-3 record with 53 knockout victories and with his last loss coming more than 10 years ago.

Tyson Fury, who is 4.50 (7/2) underdog at Bet365, has an immaculate record. He turned pro in 2008 and since then he recorded 24 victories, 18 of them being knockouts. It seems that the promo campaign for the bout in October will be fun to follow, as the 26-year-old started the fight with his mouth already.

British fighter Tyson Fury wants to break Klitschko’s face in their upcoming match, gambling news report. The 26-year-old considers Wladimir Klitschko as boring, and he said his opinion to the Ukrainian in person in a media session. Fury said, “You have about as much charisma as my underpants – zero. I’m interested in breaking your face in.” 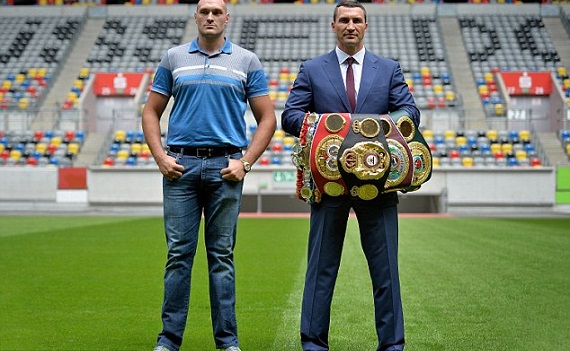 Fury’s talk is nice, but Klitschko has a lot more to show (Getty Images)

The 39-year-old Ukrainian suffered his last defeat in 2004 against Lamon Brewster. Klitschko possesses the belts of WBA, IBF and WBO. He prepares for his 28th heavyweight title match, which is a world record. Followers of gambling facts might know that this will be his 19th title defense in his second world champion spell. However, Fury thinks that this was it for Klitschko.

Fury said, “I’m interested in all of them belts you’ve got on there. I want to rid you out of the heavyweight division. You go on – you’re a sports psychologist, you speak 37 different languages, so what? You’re still a robotic person. You’re still not exciting and fun to watch. I am the new blood in the division, you are an old man.”

Klitschko had a fitting answer for the Briton. He said, “This guy is so entertaining. He sings, he dances, he is a cool dude. He does different things that people like – or hate. Some people adore you, some people say they can’t stand you, which is good.”

Independent.ie: ‘I’m interested in breaking your face in’ – Tyson Fury throws down gauntlet to Klitschko

Tyson Fury and Wladimir Klitschko met in Dusseldorf, Germany to promote their fight that will be held in the city in October. Fury wants to break Klitschko’s face in, no less, as he considers the Ukrainian as a boring and uncharismatic fighter. Fury said, “It’s a personal mission for me to rid boxing of a boring person like you. Your jab-and-grab style – surely all of Europe wants to see you get beaten and all of Europe and the rest of the world will see you get beaten.” 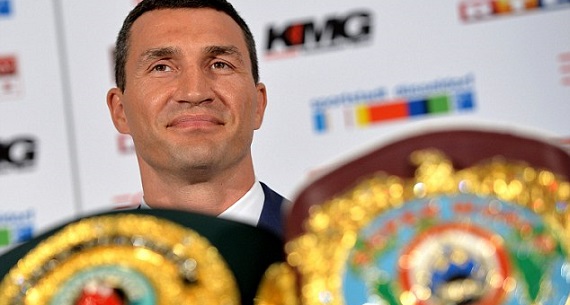 Klitschko doesn’t believe his face will be smashed (Getty Images)

Fury considers himself Klitschko’s nemesis. He expressed, “I believe he has never faced a challenge like me ever before and I don’t think he will face a challenge like me again.” Followers of live sports results might have noticed that he doesn’t have self-assurance issues it seems. He added, “I’m a unique fighter, one of a kind, there’s never been someone like me before in history. A fighter like me only comes around every 1,000 years.”

Klitschko said that he was a fan of the Briton, and he thinks that Fury could really challenge him in their upcoming fight. He said, “I believe Tyson Fury is really meaning what he is talking about and he is definitely not coming here on October 24 just to be present and be on the canvas. No, he came here to win the championship fight.”

Dailymail.co.uk: Tyson Fury promises to smash Wladimir Klitschko’s face and says Ukrainian has ‘as much charisma as my underpants’

Wladimir Klitschko prepares for his 28th heavyweight title bout, this time against Tyson Fury, as many sports scores fans might know. That would be a world record with Klitschko overtaking Joe Louis. The legendary American fighter currently holds the record together with the Ukrainian. However, the Irishman slammed the Ukrainian’s statistics in a Dusseldorf press conference where the two were promoting the upcoming Tyson Fury v Klitschko match. 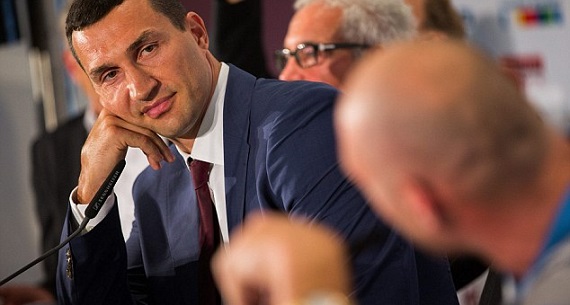 “Save it, kid, that pikey talk will not work on me” (Photo: EPA)

The Briton said, “Are you greater than Louis, Ali, Frazier, Holmes? I think not. You’ve just fought bums well selected for you by your management.” Fury, who sometimes underlined his statements with swearing, considers himself “an American-style fighter with European fitness”. Fury wants to break Klitschko’s face in, as he confirmed, adding that he didn’t care about anybody’s opinion of what he said as he didn’t consider himself a role model.

Fury, who kept on abusing Klitschko, also spoke about the size differences, him standing 6 feet 9 inches, three inches taller than Klitschko. He said, “When I look at you I’m not feared. I don’t even see a big man because you’re not only shorter than me but you’re light for a modern heavyweight. You look old even though I think you’ve had botox. Jab-and-grab won’t be enough against me.”