Argentina Thrashed Paraguay in the Semifinal of the Copa America 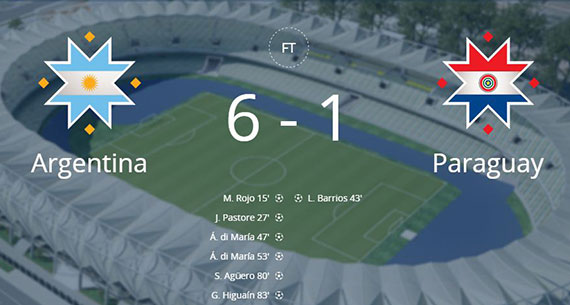 Argentina met Paraguay again at the 2015 Copa America after the two sides played a 2–2 draw against each other already in their Group B meeting. Lionel Messi and his teammates had the upper hand on that occasion, but somehow they were unable to finish the game off and Paraguay came back to equalize and grab an important point.

This time Argentina took a two-goal lead once again, but now they did not let the same happen, though Lucas Barrios made it 2–1 before half time. Tata Martino set his players to terminator mode for the second half however and they scored four more to back their claim to the title, which they can win against hosts Chile who look for their maiden Copa victory.

Argentina hammered Paraguay in the second semifinal of the Copa America and will meet with Chile in the title decider on Saturday. Argentina put six past Paraguay goalkeeper Justo Willar and the goals of Albiceleste came from Angel di Maria, Marcos Rojo, Javier Pastore, Sergio Aguero and Gonzalo Higuain, online gambling news report.

Just before half-time it seemed that the game would be much more interesting, when Lucas Barrios made it 2–1. However this time Paraguay weren’t able to come back after being 2–0 down like in the group stage match of the two, like many of those who follow sports scores would recall.

Though Argentina had a lot of chances against Colombia in the quarter-final and still were unable to score, they were much more clinical against Paraguay. Marcus Rojo took the lead after 15 minutes of football from a Lionel Messi free kick, and after that the Argentinian attackers had a lot of space to create goal-scoring opportunities as Paraguay was pushing desperately.

In the semifinal against Paraguay, Argentina showed their best display in the Copa America so far and swept their opponents aside easily with a 6–1 scoreline. That result sent Tata Martino’s team to the final where they will play against hosts Chile, gambling online news report.

Though he did not score himself, the key role was Lionel Messi’s, who organized his team’s attacking play and who also delivered three assists. Argentina had a tally of four goals from their first four matches in the Copa America, but against Paraguay they were able to score more than that in a single game. Messi expressed that the reason behind the considerable low amount of goals in the early stages of the tournament wasn’t Argentina playing badly.

“We talked about that just before the match,” said Messi, “And we said it was just chance that we hadn’t scored more because we’ve been playing well. Today all the goals came at once.” Paraguay lost their two strikers because of injuries in the first half, and though substitute forward Lucas Barrios was able to make it 2–1, Paraguay were never in contention to reach the final, as Argentina were rolling in the second half.

ESPNFC.com: Argentina thrash Paraguay to set up a fascinating final vs. Chile

When Lucas Barrios scored with a left-footer to make it 2–1, many of those who follow live sports results would think that Paraguay could be able to equalize again after going down 2–0 against Argentina, as they did in their group match. However this time Argentina came out to the second half as a virtually unbeatable side and finished the game with an embarrassing result for Paraguay.

La Albiceleste had a lot of opportunities to finish the game on the break in their group stage match, but those chances left unconverted. This time the setting was similar, however Messi and co. kept on scoring and with only eight minutes into the second half it was 4–1 and all over practically.

It is interesting that Paraguay weren’t playing any worse than they did in their first match against Argentina at the 2015 Copa America, but Argentina were so much better and more clinical that La Albirroja just didn’t have any chance to reach the final of the competition.