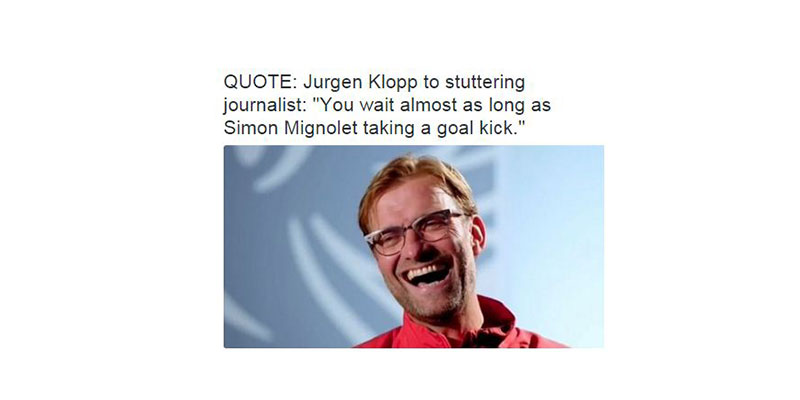 Everyone in the football world is cracking jokes about the Simon Mignolet error—even Mignolet’s coach, Jurgen Klopp!

The jovial German proved once again that he not only possesses fantastic football skills, but a warm sense of humour as well when he told a journalist who took long pauses between questions that: “You take almost as long as Simon Mignolet taking a kick.”

In case you missed it last night, Mignolet gave away a freekick for holding on to the ball for over 20 seconds… pic.twitter.com/n3JJcQVXeQ

He is referring to, of course, the bizarre Simon Mignolet error that occurred during the Liverpool versus Bordeaux match. Though a football goalie is only meant to control the ball with his hands for 6 seconds prior to a kick, Mignolet held on to his for 21 seconds before an indirect free kick which led to the visitor opener.

Needless to say, it was awkward. Really awkward.

Following the incident the football and sports betting media were buzzing with news of the Simon Mignolet error, and Klopp decided to join in on the good-hearted fun.

Had the game ended badly for Liverpool, the Simon Mignolet error would’ve been handled very differently. But given that the Bordeaux match ended in a hard-fought victory for the Reds, fans of both Premier League football and sports betting in UK can laugh things off along with Klopp.

Klopp the Normal One Can Drive Liverpool Forward 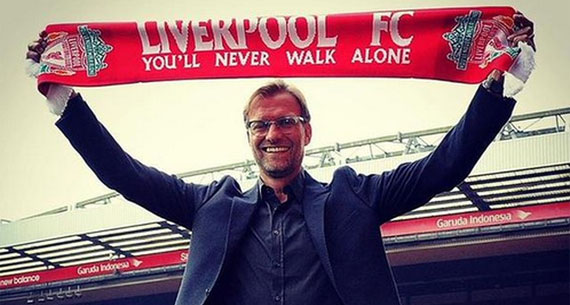 Mr Klopp, a man of many faces (Photo: Empire of the Kop, LFC)

Liverpool signed and unveiled their new manager Klopp the Normal One within a week after Brendan Rodgers was fired after the Merseyside derby.

Jurgen Klopp was the favourite to land the Liverpool job after the announcement about Rodgers’ departure was issued. According to online gambling news, Klopp was linked with the club ever since he left Borussia Dortmund this spring after a seven-year long spell. Now he was handed a job that he defined as one of the most exciting and at the same time the hardest in the world of football.

Klopp the Normal One – this might be his nickname after he jokingly referred to Jose Mourinho’s legendary arrival to English football in 2004. By the Normal One, he means that he is just another German guy who lives, eats and breathes football. But Klopp the Normal One was arguably the most sought-after coach in the football world until the Reds have secured his services.

Therefore this move is also big for the Premier League, not only for Liverpool. Actually he was linked with every one of the top clubs in the Premiership in recent years, and he also mentioned several times that his dream is to manage an English club. New he got his opportunity, and Klopp the Normal One aims to bring the Premier League title to Anfield in four years.

Source: Jurgen Klopp is a modernising force in the mould of Arsene Wenger

Some experts of football and gambling facts say that Klopp is the most exciting manager addition to the Premier League in twenty years. He will bring his approach, his pool of ideas about football, and his footballing philosophy, though many Liverpool fans are suspicious about the latter, after Brendan Rodgers’ failure to meet his own terms in the end.

But Klopp the Normal one is a football intellectual with an innovative approach, who plays good and attractive football with his teams. And he has a squad that, with a little bit of transfer tinkering, could be a perfect one to embrace his ideas. He could be a transforming force at Liverpool, and this could be huge in the history of the club. All he need is love and time to build a side that could enchant the people of Liverpool.

A Liverpool League title would be the biggest surprise in sports scores news this season, and it is no surprise that Klopp the Normal One aims to deliver the Premier League trophy in four years. Liverpool is 41.00 (40/1) to win the league according to Bet365.

What Are the Klopp Liverpool Odds after Sacking Rodgers?

Klopp showed respect to Liverpool’s traditions as an opponent too

According to the Klopp Liverpool odds, it seems that the former Borussia Dortmund coach will be the Reds’ next manager.

Before the start of the 2015-16 season, Brendan Rodgers was the favourite to lose his job first amongst Premier League club managers according to experts of gambling facts. He came up second, since Dick Advocaat (ex-Sunderland) had crossed the line a few hours earlier on Sunday. However, it wasn’t a surprise at all that the Liverpool board relieved the Northern Irishman from his duties.

Apart from the exciting 3–2 against 18th placed Aston Villa and that 45 minutes at Arsenal, Liverpool were uninspiring and unimaginative in the whole season. With this team at his disposal, Rodgers should have done better. However, Liverpool’s luck is that other teams also have been struggling so far, thus fourth place is only three points away from the Anfield Road outfit. But it will be the new manager’s job to reach that.

According to the report that emerged on Sunday at a Bosnian site that since became unavailable, Fenway Sports Group, the company that owns Liverpool FC pretty much agreed Jurgen Klopp, BVB’s former coach and his assistant at Signal Iduna Park, Zeljko Buvac on a three-year contract to take over the club.

Klopp and his assistant Buvac are very much on the same frequency (Photo: Reuters)

Since Klopp’s assistant is from Bosnia-Herzegovina, sports scores news all over the world gave credit to the rumour. And it was also forcefully backed by the official announcement about Rodgers being sacked by Liverpool soon after. With all this happening, it was understandable that the Klopp Liverpool odds suggested that the German will be the Reds’ next manager.

This was also rumoured in the spring. However, Rodgers somehow managed to keep his position then. However, now Klopp might be FSG’s number one target easily. They did not hide their intentions about approaching Brendan Rodgers in 2012, and now everyone considers Klopp as their first target, ahead of Carlo Ancelotti and Frank de Boer.

The Guardian: Jürgen Klopp in frame for Liverpool job after Brendan Rodgers is sacked

The decision to get rid of Brendan Rodgers after eight league matches into the season was criticised by many, most notably by former Liverpool player Jamie Carragher. However, the former England defender also agreed that the previous BVB coach could be the right person for the job, further boosting the Klopp Liverpool odds.

According to gambling news, the odds are continuously being shortened at online betting operators, but you can still wager on Klopp becoming the next Liverpool manager with odds of 1.20 (1/5) at BetVictor Sportsbook. They offer top underdog Carlo Ancelotti at 3.75 (11/4), while Frank de Boer’s appointment is priced at 13.00 (12/1).

According to the statement that was issued on Liverpoolfc.com on Sunday evening, the search for the new manager is underway. This suggests that maybe an agreement could be reached soon. It would be wise to place your wagers as soon as possible, since many operators might suspend betting on these market soon, as the Klopp Liverpool odds keep on shortening…