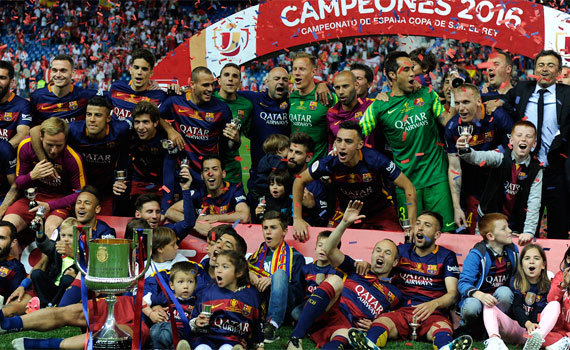 FC Barcelona played against Sevilla on Sunday night. The Spanish Cup final game was held in Madrid at Estadio Vicente Calderón, stadium of Atlético de Madrid. Online gambling news predicted Barcelona to become Cope del Rey winners once again, however it was not at all too easy for them.

In fact, the game started like all finals should: 2 equal sides, fighting for eventual glory and success of winning the golden medal. Both teams created several chances, however they failed to score in every single situation they had.

Sevilla were given a great opportunity

But the game was about to become really one-sided just before the half time. It happened in the 36th minute. Sevilla created a clear cut chance and Gameiro was about to go one on one against ter Stegen. However, Mascherano did not let that happen: he grabbed Gamerio’s shirt, and to make sure he won’t be able to go on, he pulled him down to the ground with himself.

The referee didn’t show any mercy. He rewarded the central defender with an immediate red card, forcing Barca to play the remaining minutes of the game with only 10 men. The referee’s brave decision increased Sevilla’s chances to win, according to most live sports scores reporting sites.

Despite the fact that Sevilla were playing one man more than their rival in the Copa del Rey final, and that they were created lots of chances in those remaining 10 minutes of the first half, they couldn’t score any goals so the half time result remained 0-0.

The second half started the way it was expected: Luis Enrique made a substitute because of the red card. Ivan Rakitic left the field, Jeremy Mathieu took his place in hopes of strengthening the defensive line of the Blaugrana.

As expected, the Andalusian side controlled the midfield in the beginning of the second half. That was mostly made possibly thanks to Mascherano being sent off, obviously. The Sevillanos tried to put the ball into ter Stegen’s goal on several occasions. They even hit the post in the 51st minute, Banega’s shooting changed it’s place thanks to Piqué’s interception. Barca were lucky this time.

Just one minute passed by, but Barcelona received another set of horrible news: they led a counterattack in which Suarez put the high ball back to Messi. The world class forward wanted to head the ball but instead of the ball, he found a Sevilla defender’s head.

He was knocked out for a minute, but the even worse happened to his Uruguayan mate: Luis Suarez got injured because of his pass. He could come back and play for a few more minutes but then he couldn’t continue the game. Rafinha replaced Suarez in the 57th minute. Cameras caught Suarez crying for having to miss the remainings of the Spanish Cup final, being unable to help increase the number of Barca trophies this season.

Sevilla continued to control the classic derby, having created several chances mostly for Gameiro to score. However, they failed all of them, mostly because of the incredible performance shown by Gerard Piqué, who made many important tackles and interceptions when it was needed the most.

For the last 10 minutes of the game, the pace speeded up incredibly: A member of the Barca staff was sent off by the referee for saying something inappropriate in the 83rd minute after a controversial foul. 10 minutes later we could see another red card, but this time it was for the Andalusian side.

Neymar was about to go one on one against the keeper, Evar Banega didn’t let that happen: he tackled the Brazilian, without even trying to pretend he was going for the ball. Similar situation to Mascherano’s, the red card was merited in both cases. It was in the additional time of the first 90 minutes, which ended in 0-0. Extra Time.

At this point, the latest gambling news obviously believed that Barca trophies this season will be increased by 1 by the end of the 30 minutes extra time. They hold up against Sevilla by 0-man less, they are clear favourites on 10 v 10.

Copa del Rey, another one of Barca trophies this season!

And no surprise has happened in the extra time. Barcelona, as expected, were playing as the dominant favourite of the Spanish Cup final. Sevilla managed to keep the goalless score for only 6 minutes in the extra time as in the 97th, Jordi Alba scored the Copa del Rey winning goal from Messi’s perfect assist.

The extra time was obviously dominated by Luis Enrique’s men. They created as many chances as Sevilla did; the only difference being that the Blaugrana were capable of putting the ball into the net. Twice, in fact: Messi assisted again in the 122th minute, Neymar scored this time and set the final result: 2-0 for Barcelona.

Barca trophies list this season has increased to 2 thanks to being Copa del Rey winner after triumphing La Liga as well. Barca win cup again, adding another one to their incredible amount of domestic triumphs. The Blaugrana have already been ahead of Real Madrid in regards of Copa del Rey wins by 28-19, however they still have a lots of La Liga titles to catch up with the Royal Club’s 32 golden medals.