Paraguay Broken Into Pieces by Argentina at Copa America Semi-final

In the beginning of the match that the Albiceleste were clear favourites of the upcoming Copa America semi-final against Paraguay. However, even they were surprised by how easily they manage. 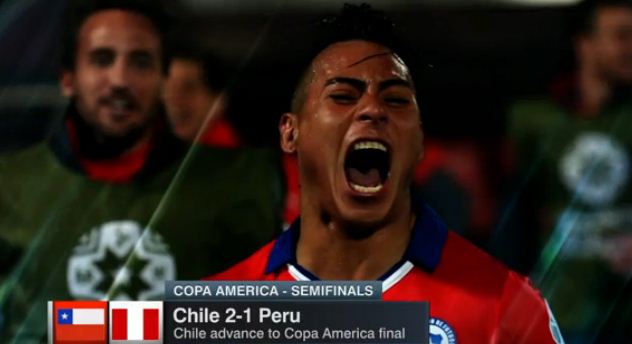 As it was expected before the tournament, Chile finally qualified to the final of the 44th edition of the Copa America, however the refereeing favoured them once again, just like in the quarter-final against Uruguay. Against La Celeste, Edinson Cavani was sent off after hitting Gonzalo Jara, who was trying to finger his backside. Jara was handed a three-game ban reduced to two eventually after the game, but he was able to remain on the field in the match that also saw Uruguay’s Jorge Fucile being red carded.

Against Peru, Chile’s Arturo Vidal was lucky to avoid a red card, while Carlos Zambrano from the visitors had an early bath after a foul in the 20th minute. Napoli striker Eduardo Vargas decided the game with his two goals, the first coming from offside. Chile will now take on the winner from the Argentina v Paraguay semi in the final showdown where the hosts will attempt to deliver their first ever Copa title.

Chile is a bit closer to winning their first ever Copa America title after they were able to defeat Peru 2–1 in the semifinal of the competition. However a controversial decision from the referee stealth the show once again, as Carlos Zambrano was sent off in the 20th minute to favour the hosts just like when Edinson Cavani and Jorge Fucile was red carded in Chile’s quarter-final against Uruguay. 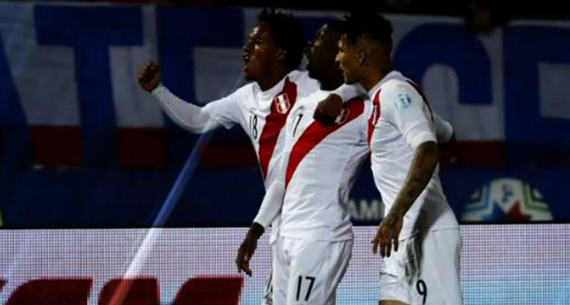 Peru striker Paolo Guerrero was understandably disappointed as the Incas had a good start though considered as underdogs by virtually every gambling blogs before the game. He said, “I think Zambrano’s expulsion was a bit tough. I don’t want to complain about the refereeing but there were a lot of unexpected decisions. If it had been 11 against 11 it would have been a different story.”

Chile took the lead with a goal from Eduardo Vargas that came from offside and though Peru was able to equalize through Gary Medel’s own goal, Vargas scored his second with a 30-yard dip to send the hosts into the final where they will meet the winner of the Argentina v Paraguay semi.

Chile advanced to the final of the Copa America in a controversial game against Peru in the semifinal where at least the beautiful winner of Eduardo Vargas that came in the 65th minute was an entirely clean score. Chile will participate in their first Copa final since 1987, according to gambling facts.

Peru’s Carlos Zambrano got a red card in the first half and Chile’s Arturo Vidal was lucky to walk away without one before Eduardo Vargas took the lead for the hosts when scoring after standing offside. However, Peru was still able to shock the home crowd with an equalizer in the second half, when Gary Medel tossed the ball into his own net.

When it seemed that the hosts might start to struggle, as Peru had the upper hand though being down to ten, online gambling news report, Vargas scored his amazing second goal that sealed the game for Chile.

Goal.com: Vargas: I was scoring with every shot in training

Despite Eduardo Vargas has been struggling with a knee injury, he revealed after the semifinal against Peru that he took confidence from his performance in the training session before the game. The hosts’ technical staff expected at least one goal from the 25-year-old as he scored with his every shot on Saturday, sports scores news report. 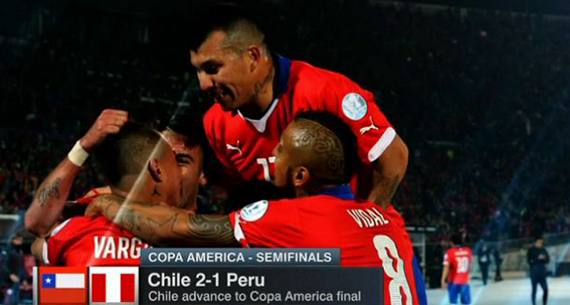 Chile gets closer to the trophy (Photo: ESPN)

Vargas said, “I was practicing shooting on Saturday and the truth is that every shot went in.” Vargas scored Chile’s both goals against Peru, taking the lead in the 42th minute after the cross from Alexis Sanchez hit the post and deciding the game with 26 minutes to go hitting the top corner with a 25-yard blaster.

Vargas has 22 goals for his country and he is on level with former midfielder Jorge Aravena, being the sixth best scorer in the history of the Chile national football team. Vargas revealed after the game, that he hardly felt his injured knee during the match. He said, “My knee bothers me in some plays but thank God it was nothing against Peru and I could keep playing.”