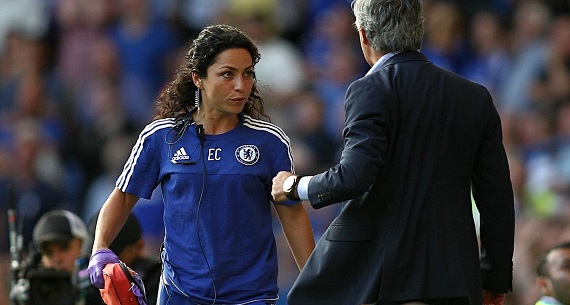 The controversy erupted after the Chelsea medical staff entered the field to treat Eden Hazard in the last minutes of Chelsea’s season opener against Swansea. Hazard had to leave the pitch due to the treatment. Since Thibaut Courtois was sent off earlier, Chelsea was left with eight outfield players temporarily. Mourinho argued that Hazard wasn’t injured, just needed a rest. He also mentioned that the medical staff have to understand football. The Special One planned to expel the Chelsea doctor from the bench for matches.

However, he was heavily attacked by other sport physicians. They insisted that Chelsea doctor Carneiro displayed a proper approach, since the medics were called from the pitch. The match ended 2-2. After the disappointing result gambling blogs speculated that it was nothing more than Mourinho’s frustration erupted. Maybe he also wanted to use the controversy to avoid his team’s display to be criticized. Gambling news reported that Chelsea’s odds to retain the Premier League title fell back slightly. Now they are top underdogs according to Bet365, available at 3.00 (2/1).

Major sports physicians defended Chelsea doctor Eva Carneiro. Their support came after Jose Mourinho revealed that he intended to drop her from the matchday staff. Carneiro learned on Tuesday that she won’t be on the Chelsea bench at games anymore. The sanctioning came after he and team physio Jon Fearn entered the pitch to treat Eden Hazard in the last minutes of Chelsea’s weekend draw against Swansea.

Mourinho said after the final whistle, “I was unhappy with my medical staff. They were impulsive and naive. Whether you are a kit man, doctor or secretary on the bench, you have to understand the game.” However, there is video evidence that the referee called the Chelsea doctors after the Belgian player went down, seemingly injured. 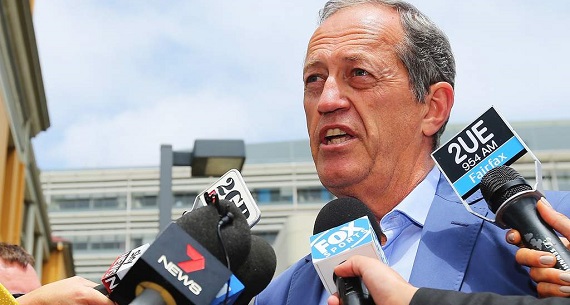 Recognized sports physician Peter Brukner was disappointed with Mourinho’s actions, online mobile news report. He said, “I thought it was appalling behaviour by the manager. He has a player who has gone down, who has remained down and the referee obviously considered it serious enough to summon on the doctor and the physio.”

He added, “They went on as they must do when they are summoned on and the player is down and, as a result, the player had to come off the ground. What do you expect the doctor to do? Just ignore the referee beckoning them on? The medical staff deserve a public apology and I’m very disappointed that the club hasn’t come out and done something to support them; they were just doing their job.”

Jose Mourinho criticized the Chelsea doctor for her actions in the title-holders’ draw against Swansea. That was followed by Eva Carneiro thanking the support of the public in a Facebook post. She wrote, “I would like to thank the general public for their overwhelming support. Really very much appreciated.” 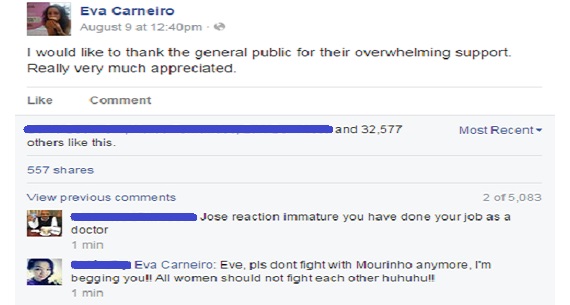 The Chelsea doctor thanked the support on her Facebook page

According to Chelsea players however, this post was the real reason behind Mourinho banning the Chelsea doctor from the bench, sports scores news report. The Premier League Doctors’ Group reacted in a statement when learning about the sanctions towards Caneiro. They are concerned that results are more important in football than the players’ health.

The statement said, “The Premier League Doctor’s Group considers that removing Dr Eva Carneiro from the Chelsea team bench for their next match is unjust in the extreme. In the publicised incident in last Saturday’s game against Swansea, the Chelsea medical staff were clearly summoned on to the field of play by the match referee to attend to a player. A refusal to run onto the pitch would have breached the duty of care required of the medical team to their patient.”

It went on, “It is a huge concern that Dr Carneiro has been subjected to unprecedented media scrutiny and a change in her professional role, merely because she adhered to her code of professional conduct and did her job properly. Dr Carneiro has universal and total support from her medical colleagues at the Premier League Doctors Group. It is also of great concern that at a time when the both the Premier League and the Premier League Doctors group are intensifying efforts to safeguard player welfare, the precedent set by this incident demonstrates that the medical care of players appears to be secondary to the result of the game.”