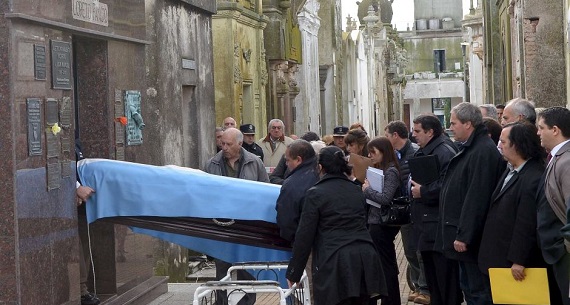 The body of Fangio exhumed in Balcarce cemetery to settle a paternity suit (Photo: Reuters)

Authorities attended the Balcarce cemetery on Friday to get the body of Juan Manuel Fangio exhumed to solve two paternity cases.
DNA samples were taken from the remains of F1 legend Juan Manuel Fangio in Balcarce, Argentina. The five-time Formula One world champion was born and died in the town in Buenos Aires province. Fangio was never married and he was thought to be childless. However, two paternity cases emerged in the last ten years in Argentina, leading eventually to get the body of Fangio exhumed. Ruben Vazquez and Oscar Espinosa both claim to be the children of the legendary driver.

Fangio won five Formula One world championship titles in the 1950s. He was only one-time champion, when he had a near fatal accident in Monza in 1952, breaking his neck as he was thrown out from his car. However, he made a comeback at 42, and went on to win four more titles.

Two men claims in Argentina to be the children of the legendary driver, Juan Manuel Fangio. With the purpose of subject to a DNA test was the body of Fangio exhumed on Friday in Balcarce. The procedure started just after 11 am local time in the hometown of the five-time Formula One world champion of the 1950s, online mobile news report. 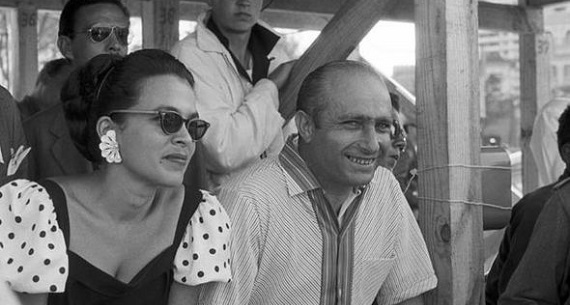 Fangio definitely had a way with women (Photo: Corbis)

To get the corpse of Fangio exhumed and perform a DNA test was ordered by a Mar del Plata judge. Mar del Plata is next to Balcarce in Buenos Aires province. The law-case had begun in 2013, as the 77-year-old Oscar Espinosa wanted to prove that he is the son of arguably the best racing driver of all time. The 73-year-old Ruben Vazquez has similar claims. His lawsuit was started in 2015. Now, after the body of Fangio exhumed, the tests can settle both cases.

Espinosa became a racing driver himself and is recognized as Oscar ‘Cacho’ Fangio in the world of motorsport. Juan Manuel Fangio did not married in his lifetime. He did not had any acknowledged children either. However, he and Espinosa’s mother, Andrea Berruet had a long relationship. According to Vazquez, his mother, Catalina Basili told him in 2005 that he is the son of the legendary driver, from a relationship in the 1940s.

Authorities in Buenos Aires province got the corpse of Juan Manuel Fangio exhumed on Friday. Genetic samples were taken from the remains of the legendary Grand Prix driver. They will be to subject of DNA tests in order to determine whether two men are the children of arguably the best driver in motor racing history, or not. 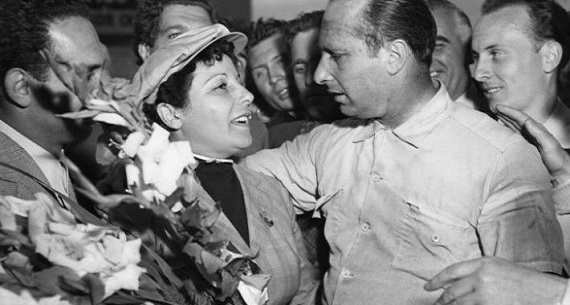 One of them is Oscar Espinosa, a former racing driver himself, who was referred as Cacho Fangio in the world of motor racing. The other one is Ruben Vazquez. The two started separate lawsuits. Fangio is regarded as the best racing driver ever by many of those, who follow sports scores. He dominated Formula One’s first decade in the 1950s, winning five world championship titles. He died in 1995 at 84 years of age, without marrying or having officially recognized children.

The 73 year old Vazquez stated that his claim has nothing to do with money. He said, “There are no economic interests in my request. I just want to be recognised for the Fangio surname.” Andrea Berruet, the mother of Espinosa had a long relationship with the legendary driver that ended in 1960. He supported his claim to be Fangio’s son with letters the F1 legend wrote to Berruet.

According to the order of Judge Rodrigo Cataldo to get the corpse of Juan Manuel Fangio exhumed, the process was carried out on Friday. The genetic samples that were taken will be the subject of a couple of DNA tests. The point of the procedure is to determine two men’s paternity cases. Ruben Vazquez and Oscar Espinosa both claim to be the son of the Formula One legend. 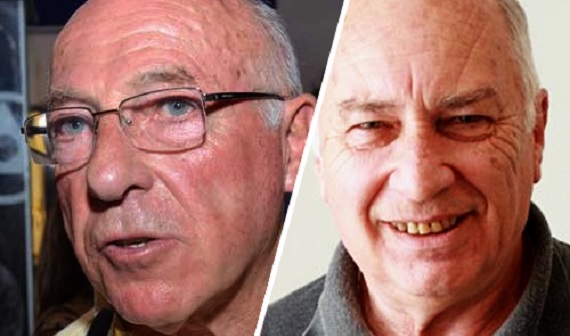 “Facial evidence” is quite convincing in both claimants’ case (Photo: minutobalcarce.com.ar)

Representatives of the Juan Manuel Fangio Foundation were present at the Balcarce cemetery. The five-time F1 world champion was born in the Argentine town in Buenos Aires province. Fangio died at 84 in his hometown 20 years ago, on July 17, 1995. He never married and did not have officially recognized children, as many of those, who follow sports scores news in Argentina might know.

Vazquez started his paternity lawsuit ten years ago. He said, “The paternity request was started a long time ago and I’ve had to overcome a lot of blockages and obstacles.” He added, “I have no contact with the Fangio family and of course I’d like to know them.” According to Vazquez, her mother, who died at the age of 103 in 2012, signed papers in front of a notary public, stating her son’s father was Fangio.