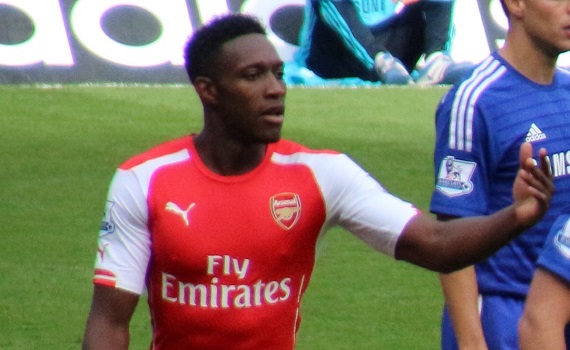 Welbeck played 10 minutes this season, but this meant two points for the Gunners

The English top-flight is like the NFL was in the middle of the 2015 regular season. Hectic Premier League Results keep on upsetting bettors week by week.

Alright, you could see Arsenal beating Leicester coming, but with a winning goal that late in the game and from Daniel Welbeck? Weird. Okay, it’s not that crazy like Kolo Touré scoring in an EPL game or Tottenham defeating Man City at Etihad, since this Sunday was full of surprises. However, many players and experts of gambling facts lost money on these hectic Premier League results.

Mentioning Kolo Touré, this match against a rubbish Aston Villa side was vital for Liverpool. Daniel Sturridge, Philippe Coutinho, Divock Origi just came back from injuries and Jordan Henderson is also in the gathering speed phase of his game. This means that the Reds line-up did not have to feature the likes of Jordon Ibe or Adam Lallana, resulting a more fluid, and most importantly, more fruitful attacking game. But this was virtually against a Championship side, so you might not want to draw too many conclusions from this.

Manchester City slipping at home, again, is a blow to their campaign. They are still close, but could have moved within three points from Leicester and overtake Tottenham. Instead they remained fourth and Spurs second. There are still 12 games to go and Leicester have no European football in their schedule. However, as things are now, it seems that Arsenal are the favourites of this year’s championship. They have the best odds at Betway Sportsbook, available for 2.63 (13/8). Tottenham are second favourites, selling for 3.50 (5/2). Leicester goes for 3.75 (11/4), however, hectic Premier League results and sports scores can still alter this picture in the following weeks.

Manchester United going down at Sunderland virtually ended their campaign. They have too many things to sort out, including the position of their manager, plus Europa League football in their schedule, which is a huge distraction. The Red Devils might start to concentrate on Europa League however, as with some more hectic Premier League results, it will be easier for them to qualify to the Champions League by winning that competition than coming fourth in the English top-flight… 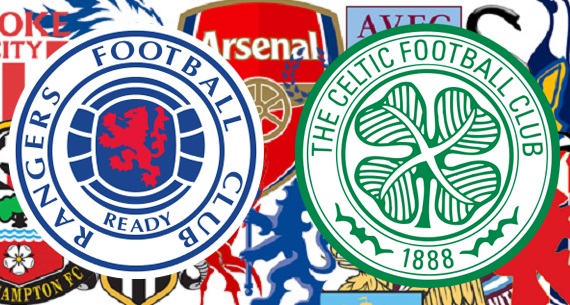 Would they allow Celtic and Rangers to join English Premier League this time?

Celtic majority shareholder Dermot Desmond expressed that Celtic and Rangers to join English Premier League is a must and will happen in the next decade.

Though professional football clubs based south from the Border rejected Celtic and Rangers to join English Premier League six years ago, Desmond thinks that such a move is inevitable. The Celtic majority shareholder thinks that this is not just good for the Scottish giants, but for Scottish football and clubs playing in the English Premiership as well. He envisions a British Premiership for the future, online mobile news report.

According to Desmond, Celtic and Rangers belong to the top 10 British football clubs, and thus they should play in arguably the strongest league in the world. Actually Rangers should have to get back to the strongest division in Scotland first, as they failed to beat Motherwell in the final of the Scottish Championship playoffs last year…

Anyways, it is a topic that reappers from time to time. As all experts of gambling facts know, no other club than these two were able to win the Scottish top-flight in the last 30 years, and it is understandable that they see themselves playing in a different league. Though currently sitting second, four-points behind leaders Aberdeen, Celtic are 1.11 (11/100) favourites to win the Scottish Premier League at Betway Sportsbook.

The Guardian: Celtic and Rangers will join English top flight in next decade – Dermot Desmond

Dermot thinks that if there would be a change in the structure at the English Premiership, Celtic and Rangers to join English Premier League could actually happen.

He said, “In Italy and in Spain you have the bigger clubs like Barcelona and Real Madrid who negotiate their own football contracts, because they are more advantageous to them. I think that will happen in the UK with Manchester United, Liverpool and Arsenal and then I think they will institute a change in the structure of the league.” 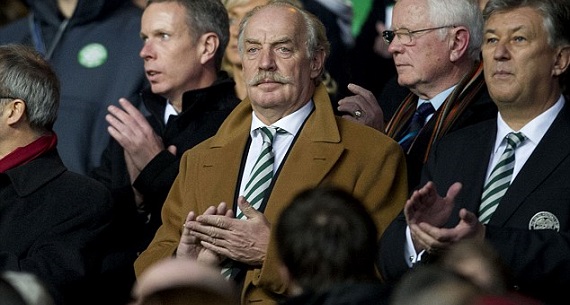 Desmond definitely thinks his side is too good for Scotland (Photo: SNS)

A move that would see Celtic and Rangers to join English Premier League was vetoed by English clubs last time in 2009. Their reasoning is also understandable: by including two new clubs at the top would cause two English sides losing their position. Some tinkering could be done with a 22-club Premiership for a year with four or five teams relegating to the Championship as the Premier League go back to 20 teams, but the UEFA would still have to approve all this.

Some say that this is absurd, but two years ago Premier League sports scores news featured two sides from Wales: Swansea City and Cardiff City. Though the Bluebirds – then playing in red – have relegated, Swansea continue to be an integral member of the English top flight. Maybe the time of a British Premier League will eventually come after all.

Manning over 70,000 Yards in Dramatic Win 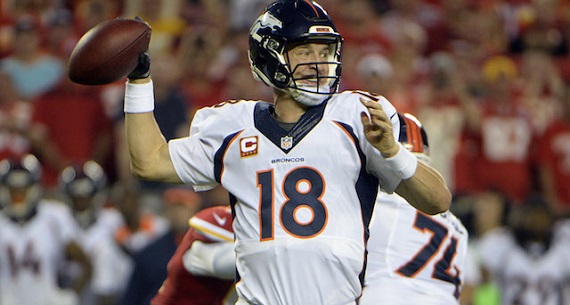 “Peyton Manning over 70,000 yards, the second QB after Brett Favre” was the big news Thursday night before the Broncos’ last minute comeback against the Chiefs.

Roughly a year ago, Manning left the 500-TD mark behind. He broke Brett Favre’s NFL record of 508 touchdown passes soon after, as experts of gambling facts might remember. Now, Manning over 70,000 yards in passing in his career and on his way to brake another record of Favre, namely the all-time record of 71,838 passing yards. And it is noteworthy that reaching the latest milestone came in a game, where the Broncos offense was far from the most important unit on the field.

The Kansas City Chiefs hosted the Denver Broncos on Thursday night in a tight division matchup. The opening game of the second round of the 2015 NFL season was also a heavy defensive battle. The Chiefs dominated Manning and co. for most part of the game, also contributing with a pick-six. This was the second consecutive game with an interception return TD from one of Manning’s passes.

The visitors #D once again emerged as a dominant gang, pretty much winning the game. They harassed Alex Smith with two interceptions and forced two Jamaal Charles fumbles. Though the Chiefs running back had a 125-yard game with a TD, he lost a fumble in the red zone and another one in the last minute. The latter came through Brandon Marshall when the score was tied and was returned for a touchdown by Broncos corner Bradley Roby making it 31–24.

That was just enough to win the game for the Broncos and it came five seconds after Peyton Manning found Emmanuel Sanders in the Kansas end zone for a 19-yard touchdown. Though the Denver QB registered 3 TD-passes and 256 passing yards, and provided the “Manning over 70,000 yards” headlines for sports scores news, he produced another shaky performance. 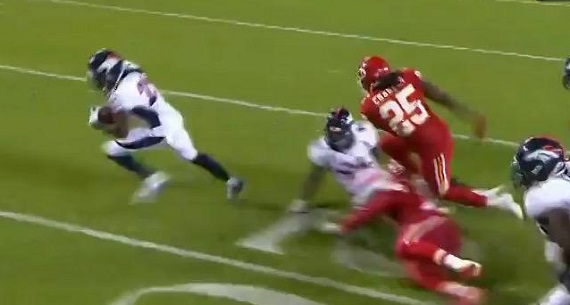 Bradley Roby thanks very much, pick 6 saves the day (Twitter)

However, it is remarkable that Manning was instrumental once again when the game was on the line, leading the Broncos offense in a fourth-quarter scoring drive. He was at his best from the shotgun when Denver went no-huddle and this might be a glimpse of things to come from the 39-year-old this term.

With an outstanding defensive unit on the board, which made a statement in an important division game, Manning doesn’t have to carry the team on his shoulders. It seems that he only needs to make his magic in the decisive moments to win most of the games. All this could be enough for another division title this year.

The game that brought the “Manning over 70,000 yards” online mobile news, also was the second in a row when the former Colt led the Broncos to a key scoring drive in the fourth quarter. He said afterwards, “To be able to win two games in this fashion, you can always refer back to games like this later on in this season. These are obviously great times to play football.”

He added, “To win a division game on the road, a great atmosphere, this place is always a great place to play football, and the crowd was rocking, they were into it. … Yeah, I think this is one that you always remember, certainly the way it ended.”

Peyton Manning is now only the 2nd player ever in #NFL history to throw for 70,000 yards. #DENvsKC https://t.co/9uHOKPppgZ

The last time when a team was able to turn the game around with two touchdowns in the last minute happened 37 years ago. Manning was only two years of age, when his father, Archie Manning lost in an NFC West division game in similar fashion. The New Orleans Saints went down against the Atlanta Falcons 20-17 after Haskel Stanback scored with 57 seconds to go and Alfred Jackson received a TD-pass from Steve Bartkowski with 10 seconds from the end of regulation.

So, Manning over 70,000 yards and the Broncos with two wins out of two. They will play at Detroit next week, who are 2.20 (6/5) underdogs at Betway Sportsbook against the Minnesota Vikings in an NFC North matchup this Sunday.