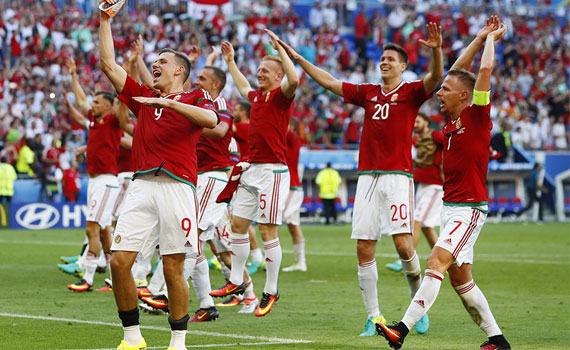 According to the latest gambling news, the chances for Hungary to win Euro 2016 are getting better and better. This is mainly caused by the amazing performances they keep showing at Euro 2016. They are still unbeaten at the tournament, they won Group F upon defeating Austria my 2-0 and tying both Iceland and Portugal, respectively by 1-1 and 3-3.

The Austrians believed that it is impossible for them not to defeat such a weak team like the Hungarian. We all know how that ended: 2 fantastic goals from Hungary’s Szalai and Stieber and zero from Austria. After that they played like a real big team against Iceland: the Nordics took the lead in the first half due to a controversial penalty, but Hungary pushed hard in the second half and did manage to equalize in the 88th minute with an own goal. They created enough chances to win by 3-4 goals but the finishing never worked.

And then they faced Portugal, who were in desperate need of a win while Hungary were sure to qualify for the Round of 16 when the match started. Unmotivated Hungary versus overly motivated Portugal, that’s what all gambling online guides predicted but that’s completely not how they game looked like: it was a perfect game from both sides. and this was the type of “joga bonito” that an average football actually enjoys watching.

Hungary took the lead early on, but Cristiano Ronaldo assisted and Nani equalized in the end of the first half. Free kick master Dzsudzsák scored as soon as the second half started: his free kick changed its way on the wall and hence found its way to the goal. Cristiano Ronaldo equalized with a terrific finishing with his back heel which was one of the most beautiful goals at Euro 2016. However, it was not enough: Hungary captain Dzsudzsák had another free kick, he hit the wall but collected the ball. He shot. And Dzsudzsák scored against Portugal for the second time. And then as if it was on repeat: Portugal captain Cristiano Ronaldo, who was playing like a true captain and world class player, which he obviously is, equalized again. Portugal went down 3 times and stood up 3 times, however Hungary were also rather heroic at this game. Terrific performance by the team and an incredible surprise from them throughout the entire tournament.

For Hungary to win Euro 2016, they must keep on playing like they have been so far and taking advantage of the fact that all opponents looked down on them. Everyone counted on underdogs Hungary  finishing last in the group and that it’s a sure 3-points for all their rivals. That’s not really how it happened in Group F: they just won the group without a single defeat and with some amazing moments.

Bernd Storck’s men will play against Belgium in the Euro 2016 Round of 16. Belgium are among the top 5 favourites to win Euro 2016. One of the most obvious gambling facts is that betting on Hungary against Belgium would be rather optimistic and you can bet on Hungary to win at online sportsbooks for pretty high odds. Should they defeat Belgium, the chances for Hungary to win Euro 2016 would become even better as the winner of Wales v Northern Ireland would be waiting for them in the quarter finals. And oh well, anything is possible and in a world full of dullness and boredom, why shouldn’t we hope for a surprise team to win Euro 2016?