Argentina or Chile to End a Bad Run in Copa Final 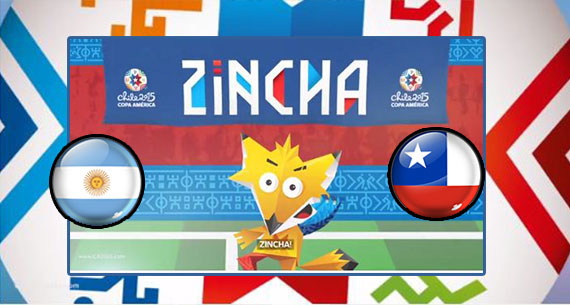 Last game of the Copa America 2015

The two best and most attractive teams of the Copa America reached the final, so the title decider should be an entertaining game even for those, who don’t follow South American football or football at all. Jorge Sampaoli, Chile’s Argentinian national coach will meet his home country in the biggest game of his career, while Lionel Messi and co. are looking for the first trophy of the remarkable generation of theirs. Paris Saint-Germain and Argentina midfielder Javier Pastore mentioned that he is enjoying his time with the national side, where his task is to help Messi and Angel di Maria to bring out the best of them.

Finally the Copa America got a fitting final, as Chile, the best team in the group phase meets Argentina, that obviously had a lot of potential and eventually started to roll against Paraguay in the semifinal. These two sides scored the most goals in the tournament, and gambling facts also has that no other team was able to win a match by a margin of more than one goal.
According to the statistics, these two outfits featured the best passers and they enjoyed the best possession rate. These two also want this Copa badly, as Chile are looking for its first ever trophy, while Argentina want to terminate a 22-year long period without a trophy.
Though Chile had the easiest draw, they were also able to control all their matches, registering a 70% average possession rate, and they scored the most goals amongst participating teams with a tally of 13. With that in mind, it is possible that Argentina, with the brilliant front three of Lionel Messi, Sergio Aguero and Angel di Maria, will sit back and try to catch Chile on the break.
It is also important to mention that while Chile is pretty vulnerable in the air because all of their players are short, fitting to their tactics that requires quick and agile footballers, Argentina has a potential to pose aerial threat.

The Copa America final will certainly end an unsuccessful run, as Argentina wait for their first silverware in 22 years, while Chile are fighting for their first trophy ever. Meanwhile, for Chile coach Jorge Sampaoli, this will be the game he waited during his entire career.
Sampaoli produces an extra show next to the sideline as his team is playing on the pitch, and this reflects to the drive that took him so far coming from Casilda, a small town in Argentina. He wanted to be a football player, but an injury prevented this, and he worked at clubs in Peru and Ecuador to become one of today’s most exciting coaches.
Some of those who follow sports scores might know that Sampaoli follows his fellow Argentine predecessor Marcelo Bielsa’s philosophy and game plan, which is all about press and attack, even against those sides that are obviously stronger than Chile. And now he has to take on the team of his home country, a far more talented side, to reach the greatest success of his life.

Goal.com: Pastore: I play to make things easier for Messi and Di Maria

Though Javier Pastore was one of Argentina’s stars against Paraguay in the Copa America semifinal where La Albirroja were thrashed 6-1, the Paris Saint-Germain midfielder revealed that for the national side his main task is to help Lionel Messi and Angel di Maria to give the best performance.

Pastore was also praised by national team coach Gerardo Martino after his performance against Paraguay, where, as keen followers of live sports results might remember, he scored a goal and registered an assist.

Pastore expressed that he enjoys the role of the midfield playmaker, online gambling news report. He said, “I am playing here to make things easier for Leo and for Di Maria.”
He added, “What I like most is setting up goals. When I give a pass that ends up being a goal I enjoy it more than anything else. Messi likes all sorts of passes, because whether you give it to him on his chest, his head or his feet, he always controls it well. He likes short passes a lot, so that he can play a one-two. He does that a lot for his club and I have seen it in training here. What he likes best is to have players nearby so he can receive the ball back.”