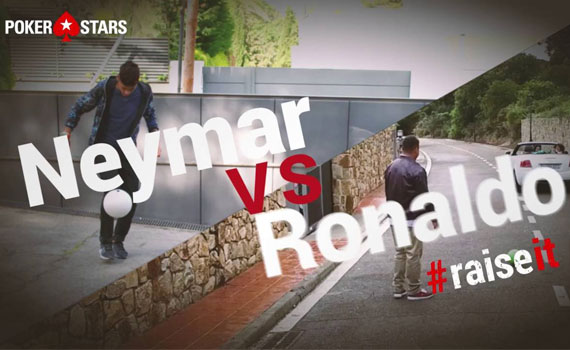 The PokerStars RaiseIt challenge, as the name suggests, has been launched by one of the most popular online poker rooms in the world.

PokerStars RaiseIt challenge is the latest social media marketing tool for the popular online poker room. The marketing team has decided that upon the popularity of competitive football tournaments such as Euro 2016 or the Copa América which, surprising all sports scores news who had predicted a win for Argentina, just finished with Chile’s victory, the best idea is to start doing marketing somehow in connection with football. The PokerStars RaiseIt challenge is nothing but the perfect solution for executing this idea.The main rule to follow is to do something impressive with the ball. Of course it doesn’t matter if you shoot with perfect accuracy or you have amazing skills or you can keep the ball in the air so long that nobody else can repeat after you. The point is that you have to be better than the ones before you, and that you have to be better than yourself every time you try again. You have to Raise It to the top, you have to Raise Yourself to the top.That is the social media marketing campaign that was launched as soon as Neymar’s video was released. Neymar showed his skills in shooting as well as placing and bending the ball in his first video when he put the ball in the car’s back from in front of the car. Neymar invited Ronaldo Luiz Nazario da Lima to join the PokerStars RaiseIt challenge and top his video by an even better performance.

Luckily for all football fans, we didn’t have to wait too long for the reply of the Brazilian legend. The incredible and outstanding Ronaldo skills were proved instantly in his reply video. He put the ball down on the street just behind a cabriolet car. One of the greatest strikers of all time waited for the car to leave. After it was far enough, Ronaldo shot and the ball enters the car after dropping on the ground once. Declaring a winner at PokerStars RaiseIt challenge won’t be as easy as simple sports scores results.

Ronaldo definitely Raised the bar to a higher standard, but that didn’t mean that Nexmar should have given up already. One of the most famous member of Barcelona’s MSN has tried to raise Ronaldo’s skills by another video that required tons of technical skills: he held the ball on this back and let go of it, perfectly putting the ball into a bucket meters underneath him. Then he takes his second ball, keeps it in the air for a while and then puts it perfectly in another bucket, tens of meters away from him.

Neymar definitely managed to Raise It for now, however online gambling news are still hoping to see another terrific idea from Ronaldo. We are sure he didn’t just give up on his PokerStars RaiseIt challenge. Moreover, it would also be interesting to see other famous PokerStars representatives, such as Portuguese world star Cristiano Ronaldo, entering the PokerStars RaiseIt challenge, but other footballers and non-footballers are also free to join. All they need to do is do something amazing, record it, submit the video at the website and wait for others to like the performance.