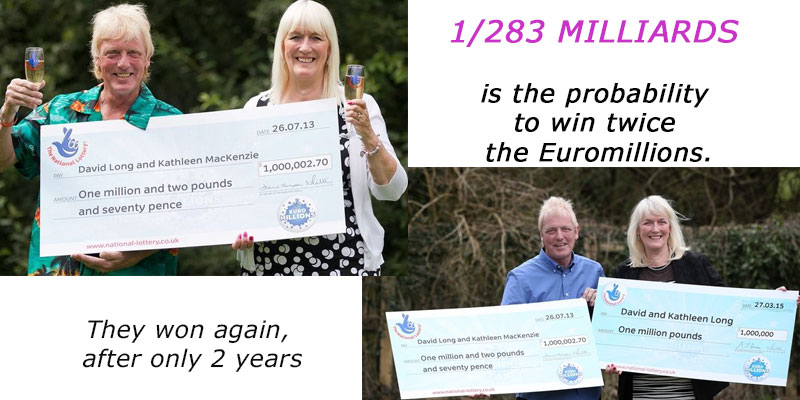 They look like they got married in the meantime…

Lightning really does strike twice—at least it did for David and Kathleen Long, who’ve won the £1 million EuroMillions jackpot for the second time in two years.

In UK gambling news almost too incredible to believe, David and Kathleen Long of Scunthorpe, England, have won their second £1 million EuroMillions jackpot. The lucky lottery winners in UK beat odds of 283 billion to 1 to win the tenth biggest EuroMillions jackpot to be awarded in Great Britain.

A spokesman for UK national lottery company Camelot said that: “This is an extraordinary situation where somebody’s been fortunate enough to win twice. As you can imagine, we see winners who win once who are very, very shocked. It must be even more shocking to win twice.”

While most fans of online casinos in UK are dumbfounded by the Long’s luck, David Long said that he knew all along that he’d win a second £1 million EuroMillions jackpot.

“I always knew I’d win, even the first time. I just had a feeling it was going to be me. I tend to play when I know there are lots of prizes on the go. Last time I knew I had a good chance because there were 100 prizes of £1 million. Last Friday night I was passing the local shop and saw there were 10 £1 million prizes on EuroMillions and a nice car and thought yeah, I’ll give that a go.”

Listening to his gambling intuition definitely paid off!