Sevilla Wins Europa League – and the Sky is Blue… 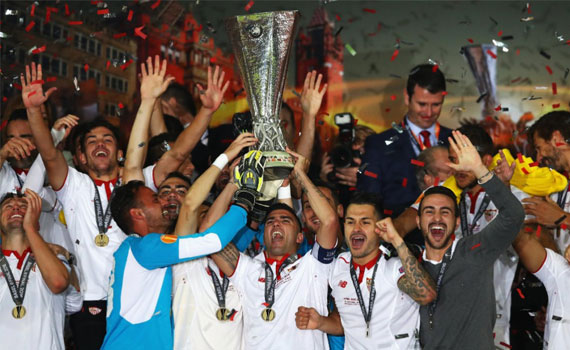 Sevilla have been crowned as Kings of Europa League for the third time in a row upon defeating Liverpool in the final.As the latest sports scores news report, the Liverpool v Sevilla Europa League final has been played on Wednesday, 18 May, with the success of the Spanish side. However, before the game started, online sportsbooks all around the world believed that Jürgen Klopp’s men were favourites despite the terrific experience of Sevilla in Europa League tournaments.

The game didn’t start all too well for the Andalusians. Live sports results after the first few minutes were about to predict an easy win for Liverpool as the English side gave everything in its power to control the game. And they managed: Liverpool created lots of chances and were in total control of the game.

In fact, Liverpool took the lead early in the game thanks to a terrific shot from the penalty area, executed by Daniel Sturridge. This could have given much confidence for Liverpool players as in the past 10 years, it happened only once that the team who scored the first oal of the Europa League final, failed to win the trophy: that was last year, when Dnipro scored against Sevilla, but the Spaniards came back and won.

The same thing was about to happen but we didn’t even know about it yet. On the one hand, Sevilla were performing a horrible game in the first half. On the other hand, so was the referee. When the result was 1-0, Liverpool should have been given a penalty for Sevilla defender’s handball in the penalty area, with which he stopped a serious chance. The referee blew nothing and Liverpool’s other chances were all missed so the half time result was 1-0.

Whenever you play online sports betting, you know that the second half can easily overturn what a game look like. Liverpool were far better in the first half, but we couldn’t predict if Sevilla were going to change that or not. Whatever happens in the dressing rooms during the 15-minute break, it’s unknown to the public. However, it’s one of the most common gambling facts that you should definitely not bet on Europa League final and on any other football game during the break!

So the second half started. And it started pretty quickly and intensively: Sevilla needed only 17 seconds to equalize, Gameiro was the scorer, Mariano, the architect. The quick goal completely destroyed Klopp’s expectations of how the second half should go and Sevilla were in total control of the game from now on. Liverpool hardly even managed to have a chance to score.

The 64th minute was the time when Sevilla finally managed to score their second goal. Coke scored from Vitolo’s assist. Moreover, the Spanish side needed just 6 more minutes to decide the game as Coke scored again following an unforgivable mistake by Liverpool defense. 1-3, and only 20 minutes to go…

Sevilla were clear favourites to win Europa League at this point thanks to their terrific comeback. And so they did: they didn’t let Liverpool try to make a comeback. Sevilla controlled the game much more safely and more importantly, much more effectively than Liverpool did in the first half. But Europa League is finished, Sevilla won the trophy once again, for the third time in a row and for the fifth time in the club’s history, thanks to their terrific performance against Klopp’s men.

Thanks to this achievement, Sevilla are going to participate in the Champions League’s group stages. They will not be favourites to win that title. However, they can always go for reaching the third place in the group. That means qualification to Europa League’s first knock out round. Should they be third in their groups once again, and they will have another great opportunity to win the title for the fourth time in a row.

To see what a major success it is to defend the Europa League / UEFA Cup title, we must pay attention to the fact that only 2 teams managed to defend their titles: Real Madrid won it two consecutive years in 1985 and 1985, while Sevilla did it twice: They won in 2006 and 2007, and now it’s their on-going row as they won in 2014, 2015 and 2016. No other team managed to defeat their Europa League / UEFA Cup titles apart from the two Spanish sides.