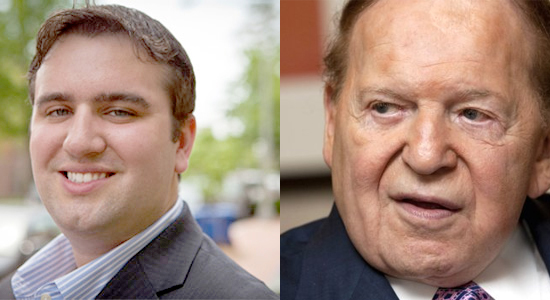 Adelson has managed to turn many politicians against online gambling, but supporters of the virtual industry are not giving up.

The battle over internet gambling in the US continues. While opponents of online casinos are becoming louder and more aggressive, Erik Telford, senior vice president at the Franklin Center for Government and Public Integrity in the United States, has expressed concerns about the influence industry representatives seem to have on politicians.

A few days ago, Telford made his voice heard too and came out strongly against casino mogul Sheldon Adelson’s political influence, in his bid to put an end to most forms of online gambling in the US. “When powerful gaming interests are spearheading the fight to ban online gambling, it should give you pause,” he wrote in an opinion piece published in the political newspaper The Hill.

CEO of Sands Vegas, Sheldon Adelson is one of the largest campaign contributors in America. With elections being held this year, several politicians have withdrawn their support for the online casino industry just to get on the billionaire’s good side.

“Their main policy objective is focused on federal legislation to ban online gambling outright – stifling their competition before it ever reaches the market. It is a glimpse of crony capitalism in its most naked form, and represents a very troubling assault on Internet freedom, giving government a foot in the door for a broader regulatory regime and usurping our federalist system,” Telford warned.

The Hill: Ending the cycle of casino cronyism

Online gambling news revealed that, in his campaign to restore the 2011 Wire Act, the casino mogul has drawn Sen. Lindsey Graham and Representative Jason Chaffetz on his side. But Telford characterized this as “a pretense to advance a moral good”, adding that “this policy would undermine the free market, encourage crime, and erode the constitutional concept of states’ rights.”

Telford quoted free market advocates, who believe that a regulated market would help protect players from fraud and concluded: “Just like Prohibition in the 1920’s, banning this vice would actually incentivize criminal behavior. Those fearful of fraud, child participation, and profits diverted to gangs or terrorists should push for legalization in every state to make the industry as transparent as possible.”

In a letter sent to US congressmen, representatives of the Institute For Policy Innovation wrote: “In this black market, where virtually all sites are operated from abroad, consumers have little to no protection from predatory behavior.”

At the end of his article, Telford reminded readers that legalizing this “multibillion dollar business” would make things more transparent, allowing authorities to verify industry revenues, as well as to profit from tax revenue.

Billionaire casino mogul Sheldon Adelson continued his crusade against online gambling at this year’s Global Gaming Expo (G2E), telling those present at the trade show that internet casinos make it easy for underage users to play because “when you’re on the Internet, you cannot know your customer.”

Roger Gros, publisher of Global Gaming Business, defended the online gambling industry, claiming that the internet allows operators to authenticate players’ identities. When hearing the argument that internet gambling should be legal because it already happens, Sheldon replied: “Then why don’t we legalize prostitution? Why don’t we legalize cocaine and heroin? That’s not a good reason, to say that they’re doing it anyway.”

Soon after Nevada, New Jersey and Delaware legalized online casino games, other states started to talk about doing the same thing. Adelson then set up the Coalition to Stop Internet Gambling, a nonprofit organization dedicated to outlawing the business once and for all.

The casino mogul wants US gambling laws to completely ban online casino games and often argues that he fears online gaming will exploit the poor by making gambling too accessible.

“I don’t want those people to get abused because when I look at people like that I see the faces of my parents,” he said in his speech. “I just don’t see that there is any compelling reason to put an electronic casino in 318 million hands.”

As one of the three states that have already legalized online gambling, New Jersey is trying to send out a message to Congress, urging officials to reject a federal ban on internet casinos. The industry is already established in Nevada, New Jersey and Delaware, and other states have announced their intentions to join them in opening the market.

A resolution from Assemblyman Vincent Mazzeo, who represents Atlantic City, says such a ban would not only damage New Jersey’s casino industry, but also infringe on its state’s rights.

“A federal prohibition against internet gaming would directly and negatively impact New Jersey by dismantling the investments that the state and Atlantic City casinos have already made to implement and regulate Internet gaming, taking away the economic and employment opportunities already realized by the state and its residents, and foreclosing the future potential of internet gaming to generate tens of millions of dollars in tax revenue, create high-tech software jobs, and foster valuable business ventures for Atlantic City casinos in this State,” it said.

“Internet gaming has begun to yield benefits for our state’s economy, over $80 million has been wagered, and that’s generating sorely needed tax revenue that’s serving as a stimulus for Atlantic City at this critical time,” Mazzeo explained in his statement.

While fully aware that the industry hasn’t reached its full potential, officials believe a federal ban would have a negative impact, rendering a number of investments useless and taking away millions of dollars in tax revenue.

The resolution opposes the “Restoration of America’s Wire Act” bill strongly backed by Sheldon Adelson, which is now before both houses of Congress.