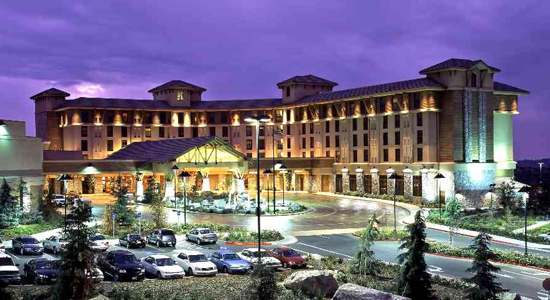 A Federal Judge decided to order down the closure of Chukchansi casino in California after different groups of Indian tribes got involved in an armed altercation at the gaming center. The Judge ruled that they may have endangered lives and posed considerable healthy risks to both employees and players that were present in the casino at the time of the event.

Gambling news reports that the popular Chukchansi Gold Resort & Casino has been closed under federal orders issued by an esteemed judge. Different Indian factions came to an armed standoff as part of efforts to take control of the gaming establishment which later lead to a lockdown of the casino.

Now the owners are pushing hard to have the Chukchansi Gold Resort & Casino reopened as soon as possible. Every single day that is remains closed serves a blow to their finances, as massive revenue is lost. Chukchansi Indian Co-Chairman Reggie Lewis stressed that the local community and employees depend on revenues generated by the casino operations.

“A lot of people depend on the casino. And since it has been opened, that’s the way everybody looks at it; it’s an asset, and we want to keep our asset functional,” stated Lewis. The casino was closed following an event that involved 20 gunmen storming into the building in an attempt to seize control of the entire establishment.

Reports indicate that the gunmen are part of a tribal faction led by Tex McDonald who stresses the casino is in fact theirs and all of the proceeds generated by Chukchansi belong to their tribe. “They came in here about a month ago and took our casino over, and they’re illegally here. So we came in and we claimed our casino.”

The Chukchansi is set to miss out on a great of events due to its closure. The alumni of Hoover High School were planning on staging a reunion event this upcoming Saturday, however now they won’t be able to do so considering the recent circumstances that led to current predicament that casino is in.

Stacey Olmos is one of the members of the reunion committee and she stated that the group gathered $7,500 from 167 Hoover graduates and paid the money to host the event at the prominent casino. With the Chukchansi now closed until further notice, they don’t seem to have any viable options to get the money back.

The altercations involved two Indian factions which led to some casino personnel in receiving injures as a result of the armed struggle. Separate groups of the Picayune Rancheria of Chukchansi Indians have been at it for a number of years. Now the casino has taken center stage as each faction is claiming that the popular gaming establishment belongs to them.

As a direct result of the attempted takeover that involved a hostile battle, the National Indian Gaming Commission and the state attorney general gave orders for the casino to be shut down. It has been reported that the faction that tried to take the casino is led by Tex McDonald, and that in fact the business initially belonged to them and not the current holders.

Following the events that occurred last week at the Chukchansi casino, there seems to be no imminent reopening date set on the agenda for the popular establishment. Tribal factions were involved in an armed standoff involving the takeover, however officials have expressed that the casino may be closed for some time as they continue to investigate the circumstances.

Over a decade ago a similar event unfolded in Iowa that also involved two Indian factions. Two leadership factions were sanctioned by the National Indian Gaming Commission which marked the last casino closure that involved a politically motivated background in the US.

A tribal faction took control of the Meskwaki Casino & Hotel, however the action was not authorized by the federal government. Once the deadline for the rogue group to leave passed, the commission chairman released an order to temporarily close the business. Later the closure turned permanent and the owners had to wait a full 7 points until it could reopen.

Phil Hogen, a former NIGC chairman, highlighted, “The ones physically running the place were not recognized by the Bureau of Indian Affairs and could not come to an agreement to put the recognized folks in place. From what I’ve heard about (Chukchansi), it’s much more explosive than Meskwaki.”

PoliticsHome: Four bookmakers set up watchdog to keep themselves in check

Latest gambling news reports that a federal judge by the name of Lawrence O’Neill ordered the Chukchansi Gold Resort & Casino to shut down after tribal factions tried to take control of the business. The judge was acting on emergency request from the state attorney general and has expressed that there is no immediate date set for the casino to reopen for the public.

After deciding that the casino posed a threat to the public, the National Indian Gaming Commission issued an express order for the establishment to be closed. Reports suggest that each faction controlled a different part of the casino, and neither wanted to stand down as they each believed they had the right to seize control of what is theirs.

Madera County Sheriff John Anderson stated that around 500 people quickly rushed out of the casino once they figured what was happening. He stressed that tension were high for weeks before leading up to the event that occurred on Thursday and has sought assistance on the matter from the state and federal officials.

Despite making no arrests in the lengthy process, the Sheriff’s department was able to cool down the tensions. Anderson said, “When they move the war into the casino, it meant we had to stop this. We have not been getting closer to a solution. If anything, we have gotten farther away.”