Officials Ban Online Casinos and Internet Poker in Singapore, but Allow Some Exemptions 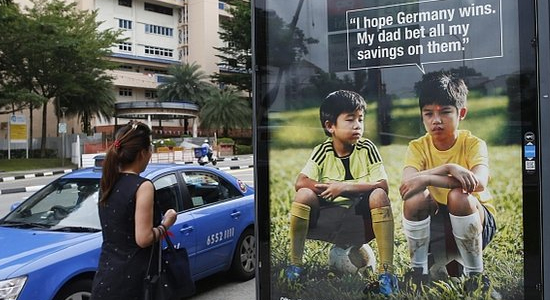 Only non-profit entities based in Singapore, who contribute to a social cause and have a good track record will be able to apply for a remote gambling license.

While other jurisdictions like Hong Kong and Norway may allow exemptions, Singapore took a strict approach when adopting its new remote gambling laws. Officials have decided that casino-style games and poker should be banned.

In fact, the rules set for the online gambling industry will be in line with those applicable to land-based casinos. Strict measures are needed in order to prevent underground operations, officials argued, citing a recent Interpol operation across six Asian countries – including Singapore – that ended in 1,400 arrests. These crime syndicates had handled about $2.2 billion in illegal wagers during the FIFA World Cup.

“We prohibit gambling, unless it is specifically allowed for by way of a stringently regulated exemption or license. We will adopt a similar approach to remote gambling,” Second Minister for Home Affairs S. Iswaran explained.

This Tuesday, the Parliament passed its new Remote Gambling Bill after a debate that lasted for more than three hours. Ten Members of Parliament participated in the discussion and many of them expressed reservations against the allowance for exemptions.

“When you look at our experience in terrestrial gambling environment we seek to maintain law and order, criminalize range of activities and allowed for tight controls not because we wish to promote it or condone it,” he explained.

MP Denise Phua (Moulmein-Kallang GRC) wondered if the exemptions send a mixed signal, by “legitimizing the act of gambling and breeding its acceptance by legally providing for exempt licensed operators”, but Iswaran said they were granted to allow the Singapore Pools and Turf Club to be set up.

Singapore’s new gambling bill criminalizes placing wagers through the Internet, mobile phones and all other types of technology used for communication. According to the latest online gambling news, authorities have imposed additional measures like blocking websites, advertisements as well as payments.

Second Minister for Home Affairs S. Iswaran said the new laws won’t affect social games like Candy Crush or Angry Birds, and other online games that use virtual currency and in-game credits. In other words, only real-money gambling is forbidden.

Players will be allowed to buy credits to play social games, for instance, but they cannot convert these credits or tokens for money or real merchandise.

“However, it is essential that the Bill is comprehensive in scope in order to stay relevant over time against the backdrop of a dynamic industry that continues to evolve,” Iswaran said.

“A complete ban on remote gambling might appear straightforward but would likely drive these activities underground, and exacerbate the associated law and order and social concerns. The provision of a strictly regulated exempt operator can help to mitigate these concerns. This has been our experience with, and approach to, terrestrial gambling,” he added.

The official described the new law as “a regime which is prohibitive with a comprehensive set of measures”, and added that only a few organizations are expected to meet the criteria for exemption.

The Ministry of Home Affairs announced that new Singaporean laws restricting gambling via the phone or Internet will take effect next year, after the Parliament passed the new Remote Gambling Bill on Tuesday.

MPs showed a great deal of interest in the matter and ten of them spoke up to ask for details, make suggestions or raise certain concerns, but by the end of the debate most of them approved of the new regulations.

Holland-Bukit Timah GRC MP Christopher De Souza said: “On one hand, you have enforcement and punishment which rightly say remote gambling should be deterred. Yet, we are also saying there can be a medium through which remote gambling is legitimate.”

Other MPs thought a total ban on remote gambling would have been more appropriate, fearing that gambling addiction cannot be eliminated if exempt operators enter the scene.

Moulmein-Kallang GRC MP Denise Phua asked: “If, indeed, we so strongly believe remote gambling is harmful and does no good to either the people or nation, then are we legitimizing the act of gambling and breeding its acceptance by legally providing for exempt licensed operators in (the Remote Gambling Bill)?”

Exempt operators must be non-profit entities in order to obtain a license, and even they might be forced to impose social safeguards such as minimum age requirements, having a preregistered list of users and not allowing wagering on credit.