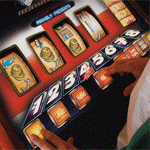 The scene of the crime is the Sho-Ka-Wah Casino in Hopeland, California. The perpetrators are eight locals, aged 38 to 47, including former casino employee Joan Elizabeth Pickron. The crime, according to state Attorney General’s Office spokeswoman Kate Gibbs, is “manipulating jackpot slot machines to cheat the casino.”

This group of gamblers have been hacking the casino’s slot machines for more than three years. No details have been release about how the group rigged the jackpot slots, but their efforts earned them a total of more than $100,000 in ill-gotten wins.

The California Department of Justice’s Bureau of Gambling Control has been investigating the situation since late 2008, and arrests were finally made last week. All eight offenders now face charges of embezzlement and grand theft.

Normally, the security of casino slot machines is quite strong, so the fact that these gamblers were able to manipulate the machines is surprising. Online jackpot slots are even more secure, since all games are monitored electronically. Fortunately, this sort of crime is rare, and even when something like this does happen, it has little effect on other patrons of the casino where the crime takes place.