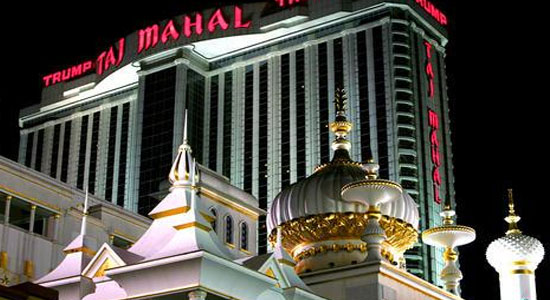 Decisive moments for Taj Mahal Casino
The jobs of thousands of casino employees depend on a bankruptcy court ruling, expected to be issued by the end of this week.

The fate of the Taj Mahal Casino in Atlantic City will be decided later this week. The venue’s management claims the casino still has a chance to survive if the court allows the withdrawal of workers’ health care and pensions.

According to online gambling news, the Taj Mahal will close by November 13 if Trump Entertainment doesn’t get the union concessions. The Atlantic City gambling operator shut its other casino – the Trump Plaza – in September. Another three gambling venues closed this year, as Atlantic City has become less appealing to visitors over the past few years.

US Bankruptcy Judge Kevin Gross said he would rule on the issue by October 17, and added that the issue needs “a lot of analysis” and that it’s “going to take a while” until he makes a decision.

Lawyers representing Trump Entertainment have argued that the union contract includes an unsustainable cost of about $20 million a year. Given its current financial situation, the company cannot afford to pay that, which is why it asked to cut employee benefits.

If the case succeeds, the casino operator has better chances of getting businessman Carl Icahn’s $100-million support, which could help save the casino from closure. The lenders also want to convert part of Trump Entertainment’s $292 million debt into equity.

In addition to cutting employee pensions and health care, investors also asked for $175 million in tax relief from New Jersey and Atlantic City. The program would be deferred over 5 years and the local administration might have to pass new gambling laws.

The management of the casino is seeking to transfer workers from a traditional pension plan to a 401(k) program, and to move them from to a new health care program under Affordable Care Act sponsorship. To help pay for coverage, workers would receive a $2,000 stipend.

According to lawyer Kathy L. Krieger, the law doesn’t allow a union accord to be rejected unless it is “essential” to a company’s survival.

Allan Brilliant, a lawyer for business investor Carl Icahn, told US Bankruptcy Judge Kevin Gross that the casino company needs the financial relief in order to survive. Trump Entertainment has threatened to close the Taj Mahal by November 13 unless it can shed pension and health care obligations to its 3,000 employees.

“If you don’t grant the motion, it’s just not viable as a business,” Brilliant argued in front of the court. “Ultimately very quickly the casino will close. This is the window here; the window is open.”

Kris Hansen, who represented Trump Entertainment, added: “If you do grant it, we have a chance to stay alive. The cost structure of this casino doesn’t work, and it needs to be fixed. If we’re successful, employees get to keep their jobs, even though they made some concessions. Having a job is better than not having a job.”

In addition to union concessions, the company needs massive tax breaks from Atlantic City and New Jersey. Both administrations have already rejected the demand. The casino initially sought to have property taxes lowered by almost 80%. But Kathy Krieger, a lawyer for Local 54 of the Unite-HERE union, believes the investors are trying to profit on the backs of the low-wage casino employees.

“Let’s look at the poorest of the stakeholders here and make sure they give up everything permanently before we’re even willing to move. That’s absolute nonsense,” she said, adding that the businessman is “asking for major concessions that will give him a huge competitive advantage over every other casino in Atlantic City.”

Union members are also making efforts to stop the famous Atlantic City from closing and have proposed counteroffers to the company’s management.

While Trump Entertainment officials want to cut costs by getting rid of health care and pension plans, Local 54 of the Unite-HERE union has proposed an alternative solution: they said they would agree to smaller pension contributions, but they’re not willing to cancel pension funds altogether.

The two parties will be discussing details in a meeting, and Trump Entertainment CEO Robert Griffin did not want to comment on the union’s counteroffer. However, he added that the company “will remain committed to negotiating in good faith”.

“We hope to make the most of the three hours we will be meeting for on Friday,” he told reporters.